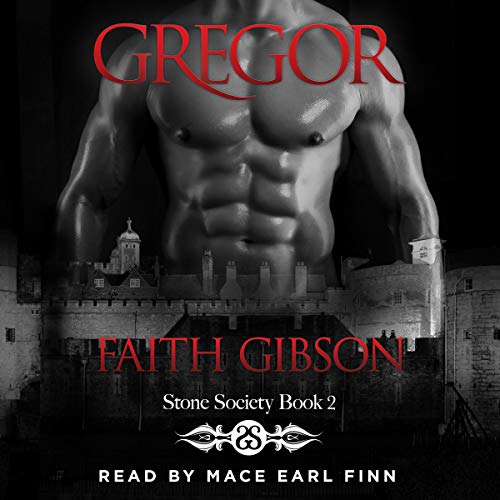 By: Faith Gibson
Narrated by: Mace Earl Finn
Try for £0.00

Gregor Stone is a full-blooded Gargoyle and the warden at the New Atlanta Penitentiary. He spends his days running the prison and his nights looking for Unholy. With the recent discovery that Gargoyles can mate with humans, there is new hope for his kind. Gregor has found his mate, but there’s one problem: she hates him. He believes his happily-ever-after is still just a fairy tale.

Tessa Blackmore is Trouble with a capital T and has been since she was a baby. Tessa is a half-blood. Her father is a Gargoyle and her mother is human. The half-bloods have hidden themselves from the Gargoyles for centuries. Now that Tessa has found her mate in a full-blood, will she continue to hide, or will she give in to the pull of the mate bond?

Tessa is running from her past and the madman hell bent on catching her. As he and his army close in, Tessa is forced to turn to the one man she has tried to avoid for years: her mate.

Book 2 in The Stone Society is about a hot alpha Gargoyle shapeshifter and his feisty redheaded mate. While the books can be heard as stand-alones, they are better enjoyed in order.

What listeners say about Gregor

I loved the story! The narrator did a great job of sounding like what I would imagine a gargoyle would sound like. The only problem is he didn't do so well with the female parts. His voice was still the slow and stilting like the male voice. I would suggest maybe using a the male narrator with a female too in the future.

Gregor’s story, book 2 in Faith Gibson’s Stone Society series, continues to let us peek into the Gargoyle clan, as they find their mates.

And Gregor’s mate is the feisty independent young woman who is used to doing just what she wants. What a surprise for both Tessa and Gregor, as Tessa alludes him at every turn.

Lots of espionage and a strong bond make this an enjoyable read!

I have to admit I enjoyed the storyline and characters in the first and this second book, but I find the narrator’s voice when changing into different characters very grating and droll! Especially when attempting a female pitch.
I’ll try to listen to the third book in the series- not sure I’ll make it to the end listening to that voice!

I loved these characters. The sex was hot. Plenty of plot action. No dull spots. Looking forward to the next book.

This was a great addition to the series as book two I enjoyed Gregors and Tessa‘s story. I can’t wait to hear book three. Great series.

Hard to listen to the narrator.

Struggled with the narrator but story made me want to finish it. Great characters and love the rationships with family.

What A Great 2nd in Series Book!!

I am really enjoying this Series, I am not much for sexual details in books, but the Storyline is so well written that I just want to continue listening to the story. Warning: I explicit sexual acts will bother you then this is NOT the Series for you. I am still waiting to find out what is going on with Vincent/Gabriel and how he will be fitting in to the full storyline.

I read this book and now I am listening to them as well. It is an amazing series.

Gregor is the second book in the Stone Society Series, and I recommend reading the first book in the series (Rafael) before beginning this one. Although Gregor has a little less world building than Raphael, so much of this post-apocalyptic, near future world and the society of gargoyle shifters and half-shifters that protect it would be difficult to understand without the initial background. Each book in the series focuses on the mate bond between a separate character, and this one features Gregor, a full gargoyle shifter, and Tessa, a half-blood shifter. Tessa is quite the character: she is fiercely independent, stubborn to the point of disregard for her well-being, and passionately protective of the half-shifters in her care. She is determined to never take a mate and fights her intense connection to Gregor from the beginning. This leads to all kinds of heat between the two, but I frequently wanted to shake Tessa for hurting Gregor with her seeming disregard for his feelings. Thankfully, Gregor is equally headstrong and determined to make Tessa his. With lots of action as they try to save Tessa from a persistent stalker and find the evil forces trying to permanently destroy their race, Gregor is a very exciting and thrilling ride.

Mace Earl Finn also narrates the first book in the series, and his narration of Gregor is equally enjoyable. He has a deep, sensual voice, and he handles both male and female roles with equal skill. He is the perfect narrator for the paranormal romance genre, and I look forward to listening to the next book in the series soon.

I was voluntarily provided this free review copy audiobook by the author and found it very entertaining. What could be more interesting then a story about a gargoyle? How about a society of them? After serving mankind for hundreds of years, Gregor meets Tessa. She's wonderful and exciting and shots him twice for just being there. Gregor is smitten. Interesting and well written characters fuels this tale of intrigue and survival. There's something for everyone in this series, suspense, action, humour, hope and romance, a very nicely rounded novel. Looking forward to the next one.