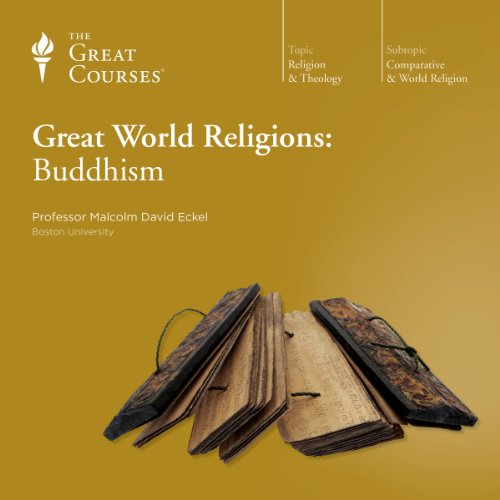 Discover why Buddhism is such an astonishingly lively and adaptable religion with this series. In just 12 accessible lectures, you'll learn how Buddhism transformed the civilizations of India and much of Asia, and has now become a vital part of Western culture.

Buddhism's core philosophy, as you'll learn, is that nothing is permanent - all is change. With this in mind, you'll plunge into an introductory look at this faith. You'll unpack the Buddhist idea that all of life is "suffering" and that there is no permanent self. You'll learn about the life story of the Buddha, Siddhartha Gautama, his teaching (Dharma), and his community of disciples (Samgha). You'll also gain a clear understanding of key Buddhist terms such as nirvana, tantra, mandala, bodhisattva, and Zen; survey the lives of contemporary, well-known Buddhists such as the Dalai Lama; and examine Buddhist responses to some of the fundamental problems of life-responses that share some surprising similarities and differences with those of other faiths such as Christianity or Islam.

These lectures are a chance for you to travel around the world and back in time, surveying Buddhism from its origin in India in the 6th or 5th centuries B.C.E. to the present day. It's a 2,500-year history that will give you a fascinating window into how a faith can grow from a tiny religious community into a movement that spans the globe.

A Very Good Introduction; but not a Course.

So, I've received "The Great Courses" catalogs for years! And for years I've been curious, but unless they are having one of their periodic sales (which I always happened to miss), I just felt they were massively overpriced. At least beyond my budget, I knew that much. So when I saw them arrive here at Audible for FAR less money, I was thrilled and purchased immediately! I listened to this title all at once, as I cleaned my house today.

A subject of particular interest to me is Buddhism, and there's two titles they offer, "Buddhism" and this one, "Great World Religions: Buddhism". The difference seems to be that this one is shorter, has less "lectures" (chapters) and is more of an introductory version. It being the lesser priced of the two, I decided to try this one out as my first purchase of these "Great Courses".

So, the first thing I feel like I should note is that it's not so much a "course" as just a lecture divided into chapters. There are no assignments, no students (other than you, the listener), no homework, books or any study materials whatsoever. That may seem more obvious here on Audible but I've always viewed their catalogs and actually thought it was some sort of, well, COURSE. It's really just listening to a professor speak on the subject, Buddhism in this case. This is fine as long as you are aware of that. I would have been livid if I had paid the $135.00 that the website wants for the CD's or even their digital price of $90.00 just to discover it's only a lecture. But for the ten bucks I paid here? Sure, worth it.

One minor criticism, and this isn't a huge deal, but worth a mention: It's a lecture in front of a "pretend audience". We're supposed to think he's standing at a podium in front of a college class of students or perhaps something like a TED talk, but it's really just clearly pre-recorded applause tracks and he's sitting in a quiet studio recording this. I mention it because it's **painfully obvious**; the chapters ("lectures") are each about 30 minutes long and start and end with the identical fake applause, so you hear that every half hour. There are times when he 'banters' or jokes with "the class", and that's just awkward because there's no one else giggling but him. However, having said that, I do actually appreciate that he makes a very genuine effort to personalize the listening experience and so perhaps I am being too harsh. Again, for ten dollars who cares, but at their full price I might have more of an issue with it.

Despite my above knit-picking, the speaker is actually enjoyable to listen to, he has an engaging voice and seems to have genuine interest in the subject. He makes a clear effort to act conversational as if there really is a live audience as opposed to a narrator reading and overall he's quite likeable and the audio is clear and good. (really good of course, since it isn't really live).

As for the actual content, it's tough for me to say as I am not a beginner to Buddhism. I think beginners would like it very much, but intermediate or advanced students would not find much new here. The emphasis appears to be mostly on the "history of Buddhism", or perhaps even a "geography of Buddhism", discussing when and where Buddhism spread around the Asian world as it grew. There is almost no mention of modern Western Buddhism or practices however, so if you're hoping for a current rundown or a 'how-to' of practices and rituals, this would not be a good choice. Also, it does not go into meditation; there's barely a mention and no instruction whatsoever; it's definitely more of a light history of it's origins and summation of it's core beliefs.

A side note: The speaker occasionally references "written material", glossary, etc., that are NOT included with this purchase. I was annoyed at this initially, but saw later that Audible does actually warn you of this below the description, I just missed it. It's nothing of major consequence to me, but if you are very new to Buddhism, he does reference a lot of names/words/terms that might be hard to look up later if you want to learn more but don't know the spelling. It doesn't interfere with the listening experience at all however, as long as the spellings aren't important to you.

Bottom line for me is that I would never-ever pay their usual full price for this, but the price that Audible is offering at is MUCH more in proportion to the content and value that you get. A great intro for newcomers who want to learn a bit about Buddhism's history.


12 of 16 people found this review helpful

A Nice Course about the History of Buddhism

I got this audiobook with the expectation that it was going to focus more on the core beliefs of Buddhism and elaborate on how believers perceive it. This book focuses more on the early history of Buddhism, how it has spread throughout Asia, and how it's changed. While it defied my expectations, it was a very good introductory course for theology students or people just interested in Buddhism in general.

The narrator was decent enough. He seemed knowledgeable and enthusiastic about the subject matter, and had some interesting stories about his experiences related to Buddhism. I also think he did a good job at conveying the mindset of Buddhist beliefs to a western audience. However, there were often these long pauses between words and sentences as he spoke, which was distracting and made it kind of difficult to follow what he was saying sometimes. Besides that, I thought he did a pretty good job.

Did Not Capture My Attention

I had originally purchased and listened to the professor's other course ("Buddhism") but I just could not get into it. I felt like there was too much "talking" (and a little bit of fluff) and not alot of teaching or explanation of the differences of the various types of Buddhism.

So I purchased this course thinking with half the time allotted the professor would likely cut out alot of the stories and focus only on the key discussion points of Buddhism. Unfortunately, alot of what was said in the other course was repeated here (including his personal anecdotes) and it had a similar effect on me: I found myself drifting away unable to stay focused on the lectures. If I wasn't driving I could easily fall asleep because my attention was never grabbed and held hostage. Alot of times it felt like a grandfather telling random stories with some history sprinkled in but not alot of explanation.

Don't get me wrong: his presentation style isn't all bad and his style may very well work for you and you may learn alot. He comes across as a very affable person who is knowledgeable and dedicated to this field of study. I just wish there were deeper discussions of how the various types of Buddhism differed from one another. I don't feel like that was conveyed very well. Lectures 3 and 4 took me the closest to an understanding of the core of this great tradition and placed me in deep reflective thought. But it didn't last from there.

If you're interested in the basics of Buddhism, for my money I would suggest courses like "Cultural Literacy for Religion: Everything the Well-Educated Person Should Know" and "Great Minds of the Eastern Intellectual Tradition".

The start I was looking for

I joined audible for the great courses - in hopes of expanding my horizons a little. I have always wanted to find out more about Buddhism and I think this course was a great intro. I thought Professor Eckel was easy to understand and seemed very knowledgeable about the subject and had traveled in Buddhist countries. The second half about the different types of Buddhism was quite interesting and I wish that had been a bit longer, but I think it got the job done for those who want to learn more about Buddhism.

this was a pretty interesting introduction to what Buddhists believe and where those thoughts came from.

the performance was good. at times the presenter would pause, and it was long enough that I had to check if my app had stopped. by the time I checked, he'd start talking again. not a complaint, just kind of a peeve.


it's interesting to note the similarities Buddhism has with Catholicism, in that traditions of human beings have been added on to the original source material to become what we know today. so, for any of you comparative types out there.

in the end, although this is interesting to learn about, I'm glad I didn't become a Buddhist when I was checking religions out as there just didn't seem to be any real sense of assurance it was the right choice.

check it out if you want to see where Buddhism came from and how it's changed over the years.

Quite interesting for the first half

The second half was about subjects which are less interesting to me, mainly the difference branches of Buddhism around the world.

Not a neutral presentation of all sects of Buddhism. Very opinionated, his sect is better than all.

Buddhism was mostly a mystery to me until I listened to this course and learned more about the rich tradition they have, as well as their view of the greater universe.

The professor is constantly trying to convert the listeners. I would have very very much preferred a straight up history and teaching on the sects/beliefs of Buddhism, I can go to a temple if I want a lecture on how to "get in touch with the Buddha."