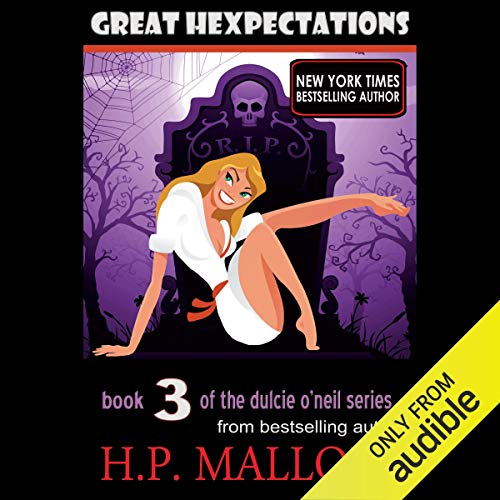 A misunderstanding turned deadly. A fairy in law enforcement who won't stop until the truth is uncovered. A vampire who seems to be her ally (but appearances can be deceiving). And a partner who would put his own life on the line to defend hers.

Dulcie O'Neil knows she's at fault for failing to arrest a wanted criminal, but when her partner gets pinned for the crime, she'll stop at nothing to ensure his innocence. What Dulcie isn't planning on is a trip to the infamous Netherworld where chaos rules. Between battling the affections of a mysterious vampire, protecting herself from monsters, and ensuring the innocence of the one man who would die for her, Dulcie's trip to the Netherworld isn't sunshine and strawberry daiquiris.

What listeners say about Great Hexpectations

I like the premise. They are easy to listen too.

Would you ever listen to anything by H. P. Mallory again?

What does Therese Plummer bring to the story that you wouldn’t experience if you had only read the book?

I really liked the first two books. Light, humorous, nice plot. The plot for this one was intriguing but the descriptive sex really didn't add anything.

I zipped through the first two stories of this series and enjoyed them. This one was a little more "sexy" than I like but still an entertaining read...with a MAJOR cliffhanger. Curious to see what Book 4 is like!

Therese Plummer did a very good job bringing these characters to life!

So far this series is great. I love Dulcie!!! all the characters are wonderful. The writing and story line are wonderful. The narrator of the story is very pleasant to listen to and the voices she does for the other characters are not harsh on the ears. I am thoroughly enjoying listen to this series. I hope that after book 4 they will be available on audio. I love plugging in to Dulcie's adventures while at work.

On a downward spiral

What would have made Great Hexpectations better?

I really wanted this Dulcie story to be more that extensive descriptions of everyone's bodies and looks, and the main character's vanity. Fail. I couldn't even begin to count the F-bombs dropped through most of the book, which really isn't that bad, but she is a good writer & is capable of pulling out at least a few different ways to describe situations? And I've yet to figure out why, when Dulcie speaks, she appears to have a chip on her shoulder about nearly every situation, and sounds over confident in herself, yet in her head, all she does is bounce around dozens of reasons to question her ability, sense, etc. She never trusts anyone except Sam, and she doesn't trust herself.

What was most disappointing about H. P. Mallory’s story?

it was just plain blech

she did great with what she had to work with. (sorry, I know that's not 3 words)

What character would you cut from Great Hexpectations?

well, you can hardly cut the main character, but I really would have liked to punch her in the face and shake some sense into her.

I love book series. Usually it means the setting is continued and the characters remain the same. The new plot of each book in the series is then easy to become involved with as you already know the background. For excellent examples of book series look at J.D. Robb's In Death Series and Elizabeth Peters' Amelia Peabody Series.

I feel ripped off and cheated when I purchase a book and get only a half of one. Book three and four are really one book but I've been expected to pay for two without being advised.

Narrator is a Ham!

It was okay but I was consistently annoyed by the narration. The voice changes are great but she is so over-dramatic that I kept getting distracted from the story. The story is fairly interesting - entertaining as it should be but I found whiny/crying voice of the lead character joltingly out of place.

Would you recommend Great Hexpectations to your friends? Why or why not?

As a written work, yes but the narrator just ruins the audio version.

She overacts enormously. Some inflection is appreciated but this is not a radio drama. Her inflections are jarringly misplaced and she over annunciates to a grating degree.

Could you see Great Hexpectations being made into a movie or a TV series? Who should the stars be?

Not really - material not quite original enough.