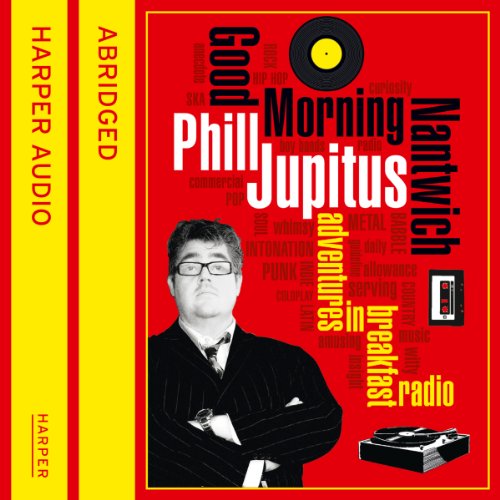 What possesses a right-minded comedian to quit the day job for life as a breakfast radio DJ?

"I have always been very aware that millions of people truly appreciate the breezy banter and lively tone of the majority of breakfast broadcasting. I admit that on occasion I have been known to wake up in a good mood and feel quite chirpy. Unfortunately for me this happens one day a year at most…." (Phill Jupitus)

Why exactly would a nationally successful stand up comedian, chuck in the exhilaration and freedom of life on the road for endless Coldplay singles, arguments with BBC management, incredibly expensive coffee, and an alarm clock set to 4.30am, five days a week?

When the BBC decided to launch a brand new digital radio station that would play alternative music for truly passionate music fans, their first port of call was to elicit the services of Phill Jupitus.

With a record collection that ran the gamut from calypso to techno, and a love of radio inspired by his childhood hero John Peel, Phill seemed the perfect choice to launch 6 Music.

Phill readily accepted, determined to do something different with such an unexpected yet brilliant opportunity. Little did he know what lay ahead.With the weighty advice of such broadcasting behemoths as Terry Wogan, Steve Wright and Tony Blackburn ringing in his ears, Jupitus tried to shake up the world of breakfast radio for the better one tune at a time.Were the public ready for something new? But more importantly, did they even want it?< /p>

In Good Morning Nantwich, Phill Jupitus not only discovers the answer but finds out what really makes the listening nation tick first thing in the morning.

Phil Jupitus argues that radio does not need to be formulaic soul less pap made by those who are more concerned with business than music. I loved this book and can not believe that there is not room on the airwaves for Phil and his ilk. Imagine a world where the content was sellected with love, care, whimsy and passion. Radio is in the hands of the dull and safe grey people who know how not to offend but do not know how to be great. In his time at 6 music he was up against a massive awareness problem and held back by the lack of digital sets. Just imagine what he could do now that digital penetration is reaching a critical mass and music lovers are allert to the gem that was so nearly lost when BBC axe men planned to close the station. A must read for all who love music radio.

Yes, and I would have listened to more. Entertaining, funny and an insight into Phill's radio career that I really wasn't aware of.

A Philup but not a Journey all the way to Jupitus

Would you listen to Good Morning Nantwich again? Why?

No, done it now. Wasn't wholly what I was expecting but interesting none the less

Would you be willing to try another book from Phill Jupitus? Why or why not?

Possibly. I had foolishly thought this would be a full autobiography of a person I thought I knew because of the stand up circuit and Never Mind the Buzzcocks. But his musical tastes seem more varied and at a tangent to mine. I have never listened to his music show. Therefore the references in this book passed me by and that it was concentrated on the period he was on the radio show meant little to me

Not really it was t that type of revelation

I still like Phill but realise I'm not really a groupie and so don't know enough to interact with him (to his relief no doubt?) and don't feel I've learned enough from this episode in his life. Maybe I just want simple anecdotes about the stars who have appeared on Never Mind the Buzzcocks

As a fan of Phil and a fan of radio I thought this would be right up my street, no such luck. Phil's writing style is engaging and amusing but sadly the subject matter is very dull, the meat of the book is made up of Phil's 5-year stint at 6music and, having read some interviews and heard some of the stuff Phil (and Phill) said, I thought this part would be really interesting, I was expecting some proper show-downs with management and a real insight into what's like to work in the Beeb. As I said, no such luck, Phil has a couple of minor disagreements with management towards the end of his time at 6music and aside from not liking some of the songs on the playlist, he mostly has a pleasant, if uninteresting (for the reader/listener at least) time there.

On a side note, there is a chapter which is not included in the audiobook which is available to download for free on this very site, it is without doubt the funniest part of the book so I recommend you just download that.

thought it would be good listening but....

Well I really like Phil on TV and the radio. I decided that this would be an interesting listen, how wrong could I be? Monotonous, dull, and mind numbingly uninteresting, great for sending you to sleep, instantly! Sorry Phil this is a dreadful read or rather listen. To use your own quote 'I would rather listen to the weather forecast in Russian'.