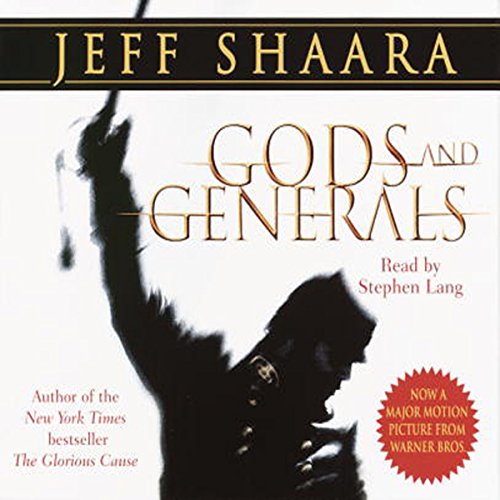 By: Jeff Shaara
Narrated by: Stephen Lang
Try for £0.00

The Killer Angels, Michael Shaara's classic Civil War novel about the men who led the fight at the Battle of Gettysburg, was a Pulitzer Prize-winning best seller. Now in Gods and Generals, Jeff Shaara carries forward his father's vision in an epic story that traces the lives, passions, and careers of these great military leaders from the first gathering clouds of the Civil War.

Here is Thomas "Stonewall" Jackson, a hopelessly by-the-book military instructor and devout Christian who becomes the greatest commander of the Civil War. We also find Winfield Scott Hancock, one of the finest leaders in the Union army, and Joshua Chamberlain, who gives up a promising academic career to become one of the most heroic soldiers in American history. And here too is the complex, aristocratic Robert E. Lee, faced with the agonizing decision of resigning from a distinguished, 30-year army career in order to defend his home, not believing until too late that a civil war would ever truly come to pass.

From the Battle of Fredericksburg, where, for the first time, all four men meet on the same field, to the Battle of Chancellorsville, when Jackson is mortally wounded by his own men, Gods and Generals paints a brilliant portrait of the lives of these great leaders during the tumultuous, bloody decade leading up to the Battle of Gettysburg.

Beautifully told, compelling in its vivid portrayal of the battlefield, and profound in its insights into the minds and hearts of those who fought, Gods and Generals is truly a worthy companion to the timeless The Killer Angels.

"Brilliant does not even begin to describe the Shaara gift. Thank Gods and Generalsthat it was passed from father to son." ( Atlanta Journal & Constitution)

What listeners say about Gods and Generals

Loved it, great narration. All in all a good book and very informative. Well done.

Hold out for unabridged version

I too was disappointed by this abridgement. The narration was excellent, but too much material was obviously cut out, leaving the story jumpy and disjointed.

I was very disappointed with the abridgement. At least two major battles are completely skipped and I found it choppy and hard to follow with so much cut.

How can you continue to give us great history books in abridged format. This is to great a book to abridge. The can is true for the Morris books and many other historys. Please offer these in unabridged version.

I love to purchase the kindle edition and audible edition so I can speed through a book three times as fast. This abridged audible did not allow me to do that. If you want all the history and all the facts don't buy this. It cuts out WAY too many good parts.

This is a book to be read/heard. but not here. The book is to complex and to good to get it here. Even though the book has a certain entertainment value in this form, it is not even close to the picture the author wanted to paint. The only desent thing to do is get it as a real book, or wait until it is released in the unabridget version. This is an insult to the men of the time and to all ohnest readers of civil war history.

This was an excellent book. I would have preferred an unabridged version.

they gutted the book
it seems most is missing. barely developed characters. dissapointing. not nearly as good as when I read the whole thing.

Disappointing narration and inconsistent/fluctuating volume level throughout. Also, I thought it was poorly edited. Glad I had read the book first (which I enjoyed), otherwise it would have been difficult to understand what was going on.

It was good but over far too early. I wanted the experience of listening to the Killer Angels, and abridging the book ruined that. I'll be returning it.

This is a great series of books but this abridged version really does it a terrible disservice and guts the story. extremely disappointing.