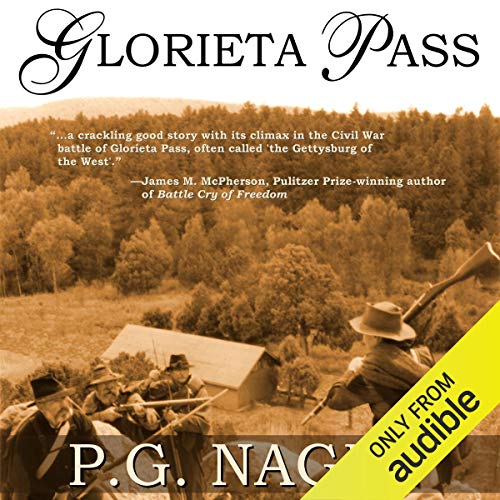 The American Civil War, a devastating conflict that claimed over 600,000 lives and raged for over four years, is the setting for this historical war novel by P. G. Nagle. Nagle follows Jamie Russel, a young Texas officer who has found himself captured by Union forces. Performed by Jeremy Arthur, Glorieta Pass in an exciting look at the everyday lives of the Americans who fought in our nation's deadliest war. Arthur does a good job of relating the truly gruesome and heart-wrenching moments of violence that consume the soldier even in the midst of combat.

The Texan Confederate armies, under General Henry H. Sibley, had their supply train destroyed by the 1st Colorado Union Volunteers at Glorieta Pass, and have only one prize remaining: A battery of Union artillery captured at the Battle of Valverde. The Texans, with their force decimated and dispirited by the absence of fallen comrades, are determined to have some glory to show for their terrible losses. But standing in their way are Union Captain Alastar O'Brien and the Colorado Volunteers.

Young quartermaster Jamie Russell, wounded and taken prisoner by Union forces, soon devises a way to bring the guns to Texas. He escapes, convinces Sibley's brain trust to try his desperate scheme, and his plan becomes grim reality as both the Blue and the Gray are inexorably drawn into the deadly drama that is the Civil War.

What listeners say about Glorieta Pass

So good. Poignant and memorable Characters.

Hard to be for just one side. Great characters of the North and South. Realistic events described so vividly.

Wish these YA books were better marked.
Main characters all young whites in the NM territory but that doesn't matter, cause this story could be set in any state that needs southern apologists.
Thought i would learn about the Glorietta battles.

This book takes you into New Mexico at the start of the Civil War and amongst the troops on both sides as they battle with their honor as much as they battle with their enemies! It took me a while to get into the story, but it soon pulled me in! The narration was good. The narrator might work on the women's voices a bit, but overall they were each distinct and I was able to decipher who was speaking for the most part!