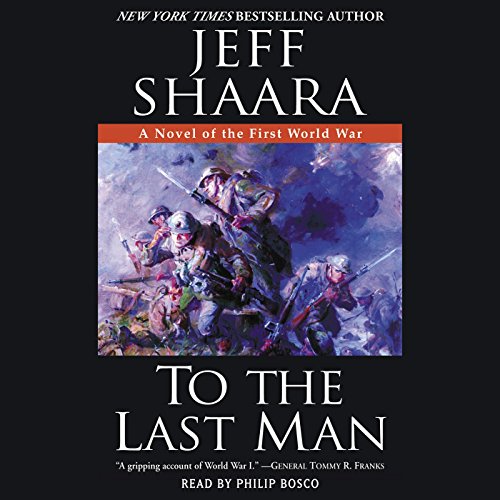 To the Last Man

By: Jeff Shaara
Narrated by: Paul Michael
Try for £0.00

Jeff Shaara has enthralled audiences with his New York Times best-selling novels set during the Civil War and the American Revolution. Now the acclaimed author turns to World War I, bringing to life the sweeping, emotional story of the war that devastated a generation and established America as a world power.

Spring 1916: the horror of a stalemate on Europe's Western Front. France and Great Britain are on one side of the barbed wire, a fierce German army is on the other. Shaara opens the window onto the otherworldly tableau of trench warfare as seen through the eyes of a typical British soldier who experiences the bizarre and the horrible - a "Tommy" whose innocent youth is cast into the hell of a terrifying war.

In the skies, meanwhile, technology has provided a devastating new tool, the aeroplane, and with it a different kind of hero emerges - the flying ace. Soaring high above the chaos on the ground, these solitary knights duel in the splendor and terror of the skies, their courage and steel tested with every flight.

As the conflict stretches into its third year, a neutral America is goaded into war, its reluctant president, Woodrow Wilson, finally accepting the repeated challenges to his stance of nonalignment. Yet the Americans are woefully unprepared and ill equipped to enter a war that has become worldwide in scope. The responsibility is placed on the shoulders of General John "Blackjack" Pershing, and by mid-1917 the first wave of the American Expeditionary Force arrives in Europe. Encouraged by the bold spirit and strength of the untested Americans, the world waits to see if the tide of war can finally be turned.

From Blackjack Pershing to the Marine in the trenches, from the Red Baron to the American pilots of the Lafayette Escadrille, To the Last Man is written with the moving vividness and accuracy that characterizes all of Shaara's work.

"A gripping account of World War I - from tactics to strategy...Jeff Shaara shows the dominance of the US military in the context of coalition warfare - as relevant today as it was in 1918." (General Tommy R. Franks)
"A sweeping, searching look at World War I. Jeff Shaara's novel rings with authenticity, from the feelings of frontline soldiers to the challenges of high-level command." (General Wesley Clark)
"A riveting masterpiece revolving around the ghastly conflict that still profoundly defines the world we live in. With To the Last Man, Shaara cements his reputation as a war writer of Tolstoyan or Homeric dimensions." (Steve Forbes)

What listeners say about To the Last Man

Best missed especially if you know a bit about the first world war. Found it a frustrating listen and eventually gave up.

Very long but worth persisting with.

A rather American centric view but never the less a good read. Have a go.

The Real Horrors of War

If you could sum up To the Last Man in three words, what would they be?

We've all read about how terrible war is and its consequences, but Jeff Shaara has brought to life the true tragedy and misery of what these poor kids in the trenches really had to endure. Movies don't depict the lice, the mud, the rotten food and the complete misery and suffering imposed on these troops. And although the pilots had it a bit better when it comes to living conditions, they all knew that their chances of surviving the war was close to nil. This should be required reading for any leader who thinks that war would be an acceptable option. My admiration for General Pershing has grown tenfold. He was another person in the right place at the right time in history. If the Americans had not entered the war, I fear that we would still be fighting it.

What was one of the most memorable moments of To the Last Man?

My husband's grandfather was killed at Ypres practically right after he got off the boat. This same scene was depicted in this story. There was no slow introduction to life in the trenches; it was jump in and join the misery.

Which character – as performed by Paul Michael – was your favourite?

We followed Patton in WWII and could not help but chuckle at his antics. Seeing the young Patton come up the ranks and lead the charge right in with his men shows that although he was a kook, he was a great general.

This is the fourth Jeff Shaara book I have listened to and each and everyone of them has been riveting and full of historical fact. I find it totally unbelievable that the Germans could think of entering into another devastating war after this horror was over. I can now understand why so many Germans are still fearful of fielding an army.

More than a novel, more than the typical approach to a history. I always enjoy a book if I feel like I learned a lot. I wasn't aware at all of the political maneuvering involved or the pressure on Pershing. I also didn't realize America's entry into the war was so late. The perspective from the Marine's point of view brought home the grisly horrors of "the war to end all wars" and the misery in the trenches. When I read something like this, I am inspired to look further and looked for more on the Red Baron and the Lafayette Escadrille. Highly recommended.

Usually love Jeff Shaara's work. This is his only swing and a miss. The pacing is off. He focuses way too long on Richthofen and Lufberry while treating the ground war as an afterthought. He ignores the vast majority of notable people in the war, only mentioning them in the afterword. To be honest, it was just boring. How you make one of the most horrific wars in history boring in the telling is beyond me but he did it. Hopefully his upcoming Korean War book will be back to his usual form. Still a fan, just not of this one.

But I had to for this book. it's one of the best books I've ever read. Top 5 All-time, and I've spent over 3 months of my life listening to audio books on Audible according to the stats. Read it.

For someone who has a hard time making it through a non-fiction history books, this was amazing. It reallly helped put context around the other WWI history books.

Good story. Characters could have been more developed as in some of Shaara’s other books.

Very poor editing with lots of repeats - kind of annoying.

Loved the story behind the history. Editing wasn't very good. There were many places where the narrator repeated a phrase. It became distracting. Still it was a great story that I enjoyed.

A Book for History Buffs

Would you listen to To the Last Man again? Why?

Yes, because I must admit to some 'tuning out' of parts of the book or being occupied with other tasks while listening to the audio book. Also, it was different from the other novels by Jeff Shaara--for some reason, I had a harder time getting into this book. I still enjoyed learning about aspects of WW I.

What was one of the most memorable moments of To the Last Man?

Didn't have a memorable moment but truly enjoyed the parts dealing with the soldiers. As with each of Jeff Shaara's novels, I enjoy the end part of the book where he goes into some detail of what happens with the characters lives afterwards.

The narrator did a great job of keeping the story going---flowed from one point to another. He didn't have a monotonous tone or abruptness that can totally blow the narration; many times the book can be great but the wrong narrator just ruins the audio book.

Who was the most memorable character of To the Last Man and why?

It's a toss up.....Dan Parker (Mountain Man) and Gino Scarabelli (Jersey). One is quiet, the other is brash but when it really matters, both will step up and get the job done.

Ok not his best, was very accurate or aligned with recent new research. still worth the read.

Great book all around

Great book. Great story. Great narration. I had not listened to much ww1 history before. Got me interested.

One of Shaara’s vey best books. Main characters and events, as well as little-known details of WWI combat, told in an excellent narrative. Pal Michael is an outstanding voice performer.