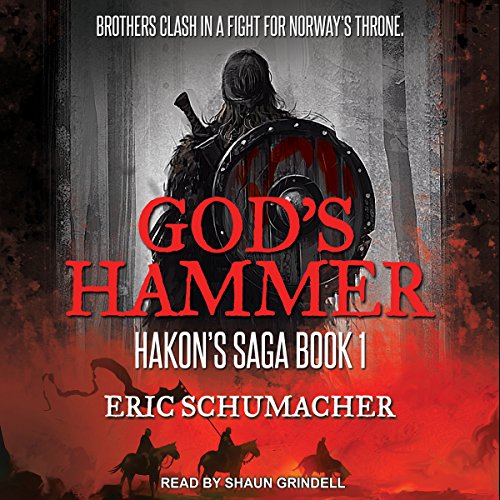 By: Eric Schumacher
Narrated by: Shaun Grindell
Try for £0.00

History and legend combine in the gripping tale of Hakon Haraldsson, a Christian boy who once fought for the High Seat of a Viking realm.

It is 935 A.D., and the North is in turmoil. King Harald Fairhair has died, leaving the High Seat of the realm to his murderous son, Erik Bloodaxe. To solidify his claim, Erik ruthlessly disposes of all claimants to his throne, save one: his youngest brother Hakon.

Erik's surviving enemies send a ship to Wessex, where the Christian King Athelstan is raising Hakon. Unable to avoid his fate, he returns to the Viking North to face his brother and claim his birthright, only to discover that victory will demand sacrifices beyond his wildest nightmares.

What listeners say about God's Hammer

Narrator kills the story for me!

I simply couldn't finish this book, and barely got through 50mins of it. The narrator (as mentioned in lots of other reviews) needlessly elevates his voice every three or so words, and at the end of each sentence making it sound like he's telling a child's fairytale or poem. This is unbearable annoying especially when trying to imagine a fight scene he is reading ! Wrong narrator for this story/genre. I'll read the book on my Kindle instead!

narrator is the best

a great story. On to the next episode. shumacher obviously knows his Norse history. great

A story of the Vikings and the Christians

I didn't anticipate a story like this to be "so" different from all the other stories about this time in histroy. It is historically accurate and moved along quickly. This story tells what the English did about all the raids, on England soil.
The narrations is one the best i have heard. This is "very important" with this story because of the strange names of the Vikings.
I recommend this book !

Might be a great story, but I will never know

The narrator is terrible. Stressing every third word or ending of a sentence and then a soars stop and pause distracts from every moment of the story so much I had to stop before the end of the first chapter. I have several hundred books and I have only return 3 now this one will be the fourth.

I really enjoyed this story or Kings and Vikings, Thor, Odin, God, etc..... I will say it was difficult for me to get past the narration. It literally sounded like a nature documentary. Nothing against them but zero imagination whatsoever. Sounded almost robotic. Nonetheless I gripped through it and found the story enjoyable .

I'm so happy I found this book. I think I've listened to almost every Viking saga available and was hoping to find another. Well this book didn't disappoint. I'm really looking forward to the second book.

Shaun Grindell as always did an amazing job narrating the story.

When I read about vikings I want the pagans to win. This is a very pro Christian book. I did not enjoy it.

a Christian view as to what happened to the Scandinavian tribes. unfair, in my view.

I think the story would be great, but...

The narrator is terrible! Every 3rd word ends on a lilting stressed syllable. It's bad.

A Narrator Will Make or Break a Story…

You could not pay me to listen to this narration any longer. I simply do not understand why an author would choose a terrible narrator. The book is not strong and to choose narration that is simply not enjoyable listening to is even worse.
After hundreds of audiobooks, I understand that narration can be personal preference. However, a listener can usually push through an imperfect narration and still enjoy a decent book for the most part. A great narration can turn a weak story into solid entertainment, but neither is the case here. I’ll be returning this and the second in series (same narrator) that I got on sale recently. Rarely do I return books on audible. I’m truly disappointed.

I listened to this and thought it was going to be good, but being unable and unwilling to kill someone is where I stop. This just makes the book worthless to me, especially since they're fighting for a crown. I want to see how you get a crown if you're unwilling to kill or maybe I don't want to see since I just stopped and returned this book. Save your money.