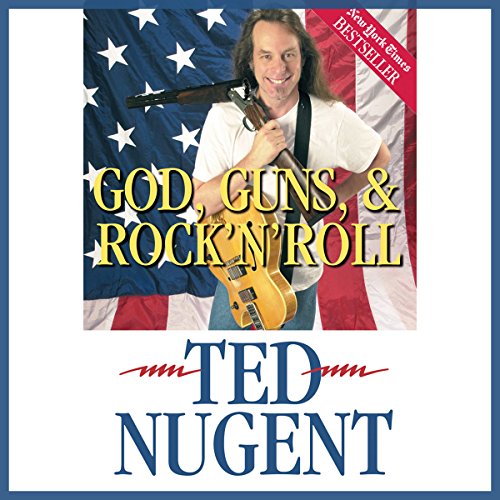 Rock-and-roll legend Ted Nugent contends that a lot of what is wrong with the US could be remedied by a simple but controversial concept: gun ownership. With humor and classic-rock attitude, Nugent lays down his prescription for what ails America: his "Warrior Code" training, highlighting the responsible exercising of second-ammendment rights.

Sll he talks about is simply killing animals

The narrator does a pretty good job of reading the text.

Could you see God, Guns, & Rock 'n' Roll being made into a movie or a TV series? Who should the stars be?

The final straw was when he started to talk about killing elephants, which are an endangered species. This was a mistake getting this book and I am requesting a refund after I finish my review of the book.

A great education in gun safety, morals and Rock.

I have listened twice, and learned even more. As well as being entertained, I learned about someone who was very influential in my youth. Ted has inspired me to get "Official" training about gun safety and ownership. We have always had guns at the beach house I grew up in on Long Island, New York. We were always safe. But you can never know too much. The stories of his music are such great fun to hear. I see "Uncle Ted" every time he rolls into Ft. Lauderdale (my home) each year. Usually winding down his tour, getting ready for the upcoming season. Like Uncle Ted says, "The music is great, but sh-t has to die."

"Uncle Ted" and the story of Fred Bear.

I would rather have heard Ted's voice, but after a while, he was Ted.

This is an absolutely spectacular listen, I've heard Ted speak for 2nd Amendment videos before he wrote this strait up honest no bullshit book. The insight to his life is awsome especially the story about Fred Bear and how respect is earned. Kudos Ted Nugent!!

Not his best book but still worth reading or listening to. Thanks for sharing your perspective as always.