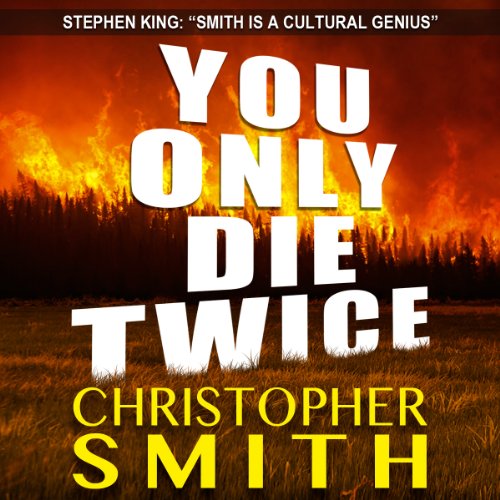 You Only Die Twice

In her past, Cheryl Dunning died once. A violent act killed her, but heroics brought her back. Now, if she can't save herself from two serial killers hunting her in the Maine woods, she's about to die again, this time from two men armed with a Bible, guns, a deep belief in God, and their twisted interpretation of his word.

Fueled by their righteous fury, they are determined to find Cheryl and murder her for what they perceive as her "life's worth of sins." What they don't know is what Cheryl knows. She's a Maine girl, born and raised - and she knows how to use these woods in ways that might, if she's lucky, turn them against each man.

From the #1 international best-selling author of many thrillers, including Fifth Avenue, You Only Die Twice is a blistering pause-resistor first, and a comment on Biblical interpretation second. It's Christopher Smith's most controversial and gripping novel to date.

*Warning: "You Only Die Twice" is not for the faint of heart. This is a story of madness and the fight for survival, and it depicts realistic adult situations without hesitation.

"Put me down as an enthusiastic Christopher Smith fan. Smith is a cultural genius." (Stephen King)

What listeners say about You Only Die Twice

What does R. C. Bray bring to the story that you wouldn’t experience if you just read the book?

This story was so absorbing. I listened to it on the way to work and then clock watched until lunch so I could hear more, took it to the gym and then sat in the car for half an hour so I could finish it. I was so caught up in Cheryl that I finished this book in one day.

What made the experience of listening to You Only Die Twice the most enjoyable?

What was one of the most memorable moments of You Only Die Twice?

The twists and turns were very entertaining.

What does R. C. Bray bring to the story that you wouldn’t experience if you just read the book?

Bray is the perfect narrator for the project

Not one but two killers

On the times in the past where I listened to an audiobook about a psychopath serial killer, there haven’t been many, but there have been some, they were told from the point of view of the cop that was hunting him down. With few insights into the mind of the killer. You Only Die Twice is not that kind of story. We are taken deep into the mind and the workings of not only one serial killer but two. Learning how they became the way they are, by ways of trouble childhoods. We are also drawn in emotionally to the victims, something I, personally, could have done without, I wanted more of the killers and they obvious insanity. Early on we meet Cheryl, who is one of the victims who actually was brutalized and left for dead. Who somehow was able to put some semblance of life back together. Going out to a bar with a close friend to only wake up the next morning with no memory of what had happened the night before. Finding that she was sexually assaulted on video and if she told anyone her friend would die. Heartbreaking, I know. But the heart and soul of this story belongs to the friend and her fight to survive not one, but two killers in the wilderness of Maine. You Only Die Twice is a no holds barred assault on your emotions. I couldn’t stop listening for a second, devouring this whole audiobook in one sitting. Sure I wish it was longer. But You Only Die Twice was a solid story that made me want the killers to “win” in the end.