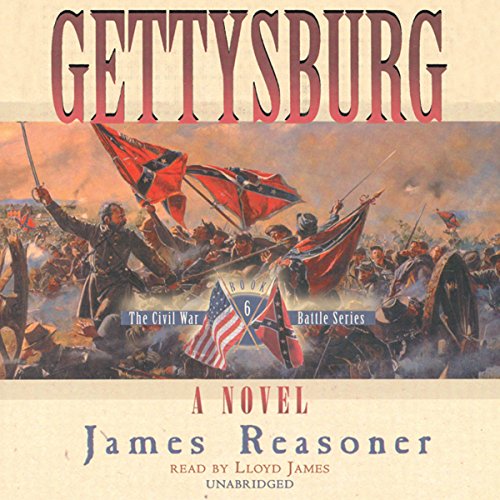 By: James Reasoner
Narrated by: Lloyd James
Try for £0.00

Gettysburg is the sixth in a 10-book series spanning the Civil War and describing its effects on one Southern family.

Stonewall Jackson was dead, but Confederate morale was never higher. Will and Mac, the two eldest Brannon sons, are in the ranks of the Stonewall Brigade and Jeb Stuart's cavalry. As Jackson’s former corps marches up the Shenandoah Valley, Lee's army follows, and they eventually clash at Gettysburg. Will is kept in the thick of the combat around Culp's Hill, while Mac sees action with the Southern cavalry at Hanover. Both are swallowed up in the melee of the fighting, and neither emerges unscathed.

Bruised and bleeding, the Confederate army stumbles back into Virginia, a fourth of their number dead. As news spreads of the defeat and the huge number of casualties, the Brannon clan in Culpeper County anxiously awaits word on the fates of two sons.

What listeners say about Gettysburg

Like those that came before excellent story telling, excellent narration, blood & guts aplenty

I stopped after 2 hrs how boring.

So moving and so heroic

As I thought would be the case if you have gotten this far in the series you will care about the different members of the Brannon family and how the war is effecting them, but what I wasn't prepared for was the incredible word painting by James Reasoner of the Battle of Gettysburg - it was some of the most vivid I've heard or read. It was brilliantly portrayed and excellently narrated by Lloyd James. I was moved to tears as I heard the valiant Pickett's Charge and its aftermath.

While this series is glorifying the south's efforts in the civil war, in this book the futility of war was very apparent and given personal meaning to the Brannon's family and the listener. I can't wait to start the next book

The pain of war was felt

To read about this as seen through the soldiers eyes, the mother’s eyes , the family & friends left me feeling their pain. It happened though & we should remember those who have fought in all the wars with respect & gratitude.

I like this series because they are indeed historically correct but I do wish there was more detail in the history part and less in the personal character part.

Author believes is the southern cause.

I really didn't like the tone of the book. Author seems to hate American.

Confederate propaganda. Almost made it seem like they were the good guys. I did not like this book.