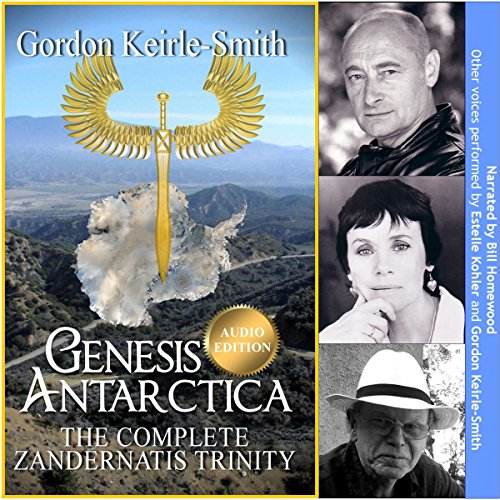 Genesis Antarctica is a multi-faceted work "based on ancient documents discovered under the Antarctic ice in 1962 by the Australian Vostok Traverse Expedition". Known as the "Haakon Urn" texts, these unique writings predate all other early civilizations (including legendary Atlantis, Lemuria, and Mu) by several tens of thousands of years.

Its core heroic saga based on "The Song of Gorin", one of the few literary documents among the texts, evokes the "Architects of Civilization", the role they played in defining "Paradise" for their children and the pivotal challenge to its survival that led to an inevitable demise.

This monumental narrative is presented as a gripping saga, in which a lone protagonist awakens in the "Paradise Garden" knowing nothing but his own name. After a series of adventures, he arrives in Zandernatis - the "Golden City". He discovers that while he knows nothing of his own origins, everyone in Zandernatis clearly remembers every detail of all their previous lives.

Fulfilling ancient prophesies, the aging King sends Gorin on a quest to find and recall the heir to the "Winged Throne" who was enticed from his ancestral, fortified home by compelling dreams that had plagued him for many months. Guided by a fabulous unihorn, Gorin ultimately meets the "Lords of Creation", setting in motion events that culminate in an apocalyptic battle to save Zandernatis from being overrun by an indigenous army, spurred on by swarms of "evil allies".

The outcome of this conflict reveals the true nature of the "Fall from Grace" described in the biblical Genesis written several millennia after the "Song of Gorin" and totally misinterpreted ever since.

This ongoing storyline is interwoven with insights into the far-reaching repercussions the discovery in Antarctica and its implications are having on our own 21st century society.

What listeners say about Genesis Antarctica

I could not finish this book

I was given a free review copy of this book and have voluntarily left this honest review, but that didn’t help me finish it. I dislike leaving negative reviews, but I agreed to write an honest review when I accepted the free audiobook, so here it is. What I liked about the book it the literary framing device. It’s supposedly about a lost work set in a lost world on Antarctica in the distant past. Then “experts” drop in and out explaining how controversial this discovery was in 1962 and tells the parallel story about the discovery. That is all well down and interesting. The problem is that the “lost work” it’s supposedly based on is a bland, boring fantasy/journey story. The fictional “experts” lend an air of validation for the lost work. But both are fiction, so it is only trying to validate a mediocre fantasy tale. It also lets the author off the hook with this device – i.e. “Don’t blame me, I’m just interpreting this lost work.” Umm, sorry. No. Other major problems – anachronisms. If this is pre-history, where one land has never seen a knife, how does the author describe it as a hunting knife (a modern invention) and how would the inhabitants know to be afraid of it in the first place? This is just one small example. For me, the narrator of the “lost text” (There are three voices, and the female voice is very talented. Reminded me of Dame Judy Dench). The narrator’s voice is simply terrible. I can only hope they are “putting on” that voice to tell this supposedly-famous-lost-tale. The end result sounds like a very bad Shakespearean actor from the 1890’s. I simply could not finish the 20-hour book. I stopped after nearly eight hours. Life is too short for mediocre fiction. Ultimately, this is an ambitious book that does not work, even with the clever literary framework.