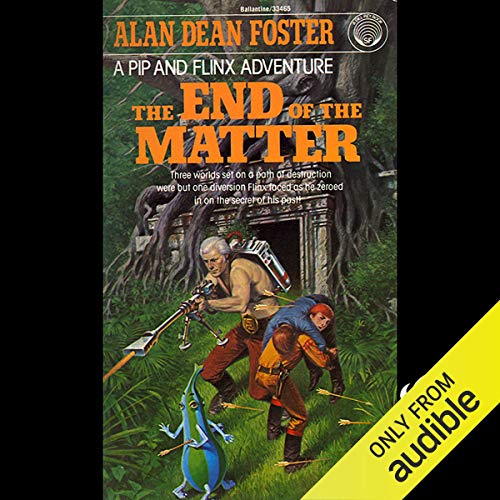 The End of the Matter

By: Alan Dean Foster
Narrated by: Stefan Rudnicki
Try for £0.00

Accompanied by his faithful minidrag Pip and a most troublesome alien called Abalamahalamatandra - Ab for short - Flinx set out for Alaspin, the ruggedly primitive homeworld of his flying snake.

There he hoped to find the giant man with the gold earring who somehow held the key to Flinx's mysterious past and to the strange powers he possessed. Chasing down his heritage was trouble enough, but Flinx didn't know what real trouble was until he realized that the Qwarm - a deadly assassin squad - were three steps behind him with a contract to kill.

But the minidrag's homeworld did not offer safety and Flinx had a terrible time just staying alive ... a matter complicated to no mean degree by a collapsar already set on an unstoppable death course across the galaxy!

What listeners say about The End of the Matter

The first installment in the adventures of Pip and Flinx. More space adventure than science fiction the story never fails to entertain. Manages to keep you on the edge of your seat as you wonder what will happen next. A good listen for both adults and Juveniles alike. Dont skip this one if you like an adventure story

the parts seemed more than the whole

This is part of a series. The book fits into a bigger story line, but successfully brings things together in this episode that it doesn't simply feel like a con to sell more books.

The characters are quite interesting, but not gripping. I was quite interested in their faits, but not enough that I"ll look up the earlier books, or look for more of the series.

I like Alan Dean Foster as a writer and maybe it is that his works make better reading than listening to. What you can read in a moment of two draws out with narration.

Stefan Rudnicki does a good job with the pace, tone and accents. One or two slip a little, but enough to be annoying; very occasional.

The narration is missing the Prologue, 1/2 Story.

The prologue is missing which is the plot line for 1/2 the story. Shallow character development when compared to previous books in this line.

As always A. D. Foster delivers with Flinx & Pip..

What did you love best about The End of the Matter?

Story keeps you enrolled right through the end...

What does Stefan Rudnicki bring to the story that you wouldn’t experience if you just read the book?

Flinx finds more on his parentage

After returning home to Moth Flinx foils an assassination attempt by a group who will move the galaxy to see him dead because he did foil the attempt. This Book introduces one of Fosters most enigmatic characters Skua September. In the process of finding more on his parentage he saves the Commonwealth (again) with the return of Humanx we met in the The Tar-Aiym Krang ( book 1). Great Listen and is another fast paced Listen. Lots of Fun!

Stefan rudnicki does a very good job representing the different characters in the book and has a nice pace, very easy to listen to.

Have listened to many unabridged audio books and this is the first one that's missing the prologue.

I loved this book. I'm going to listen to them all. I've listened to the first 3. Won't stop now by golly....

I love Alan Dean Foster's writing style. Its hard to go wrong with his stories.

Like all flinx books it's fun to see what insane thing leads to the next. Always amusing.