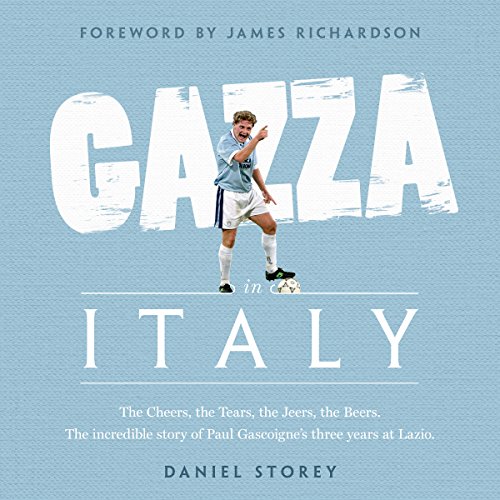 By: Daniel Storey
Narrated by: James Richardson
Try for £0.00

England are on the brink of reaching their first World Cup final in 24 years. Twenty-three-year old Paul Gascoigne has been one of the breakout stars of the tournament. His athleticism, speed of thought and incredible natural gifts have given England fans renewed faith in their perennially underachieving national side.

Then, in the 99th minute of a tense semifinal against Germany, Gascoigne lunges into a mistimed tackle. The ref awards Gascoigne his second yellow card of the tournament, meaning that if England were to win, he would miss the final. Gascoigne turns away, tries to hold it together, but can’t. Floods of tears run down his face. We understand. We feel his pain and anguish. The legend of Gazza is born.

Two years later, after an injury-stricken season at Spurs, he arrives at Lazio for a then record transfer fee. Expectations are sky high; he is welcomed as a footballing messiah by the Roman fans. But all is not what it seems. There are doubts over his fitness, doubts over how he will adjust to life in Italy, doubts over whether his obvious potential can finally be achieved. The three subsequent years in Italy, shot through with incredible highs and self-inflicted lows, show Gazza in all his complexity - an immense natural talent flawed by a too-fragile personality.

In Gazza in Italy, award-winning writer Daniel Storey brilliantly shines a light on an unexamined moment in Gazza’s career that encapsulates everything that we have come to associate with this most mercurial of talents: childish joy, public gaffes, wondrous skill and saddening self-destruction. Funny and harrowing in equal measure, this book allows us a better, more rounded understanding of one of our greatest sporting idols and of a tragically misunderstood human being.

What listeners say about Gazza in Italy

Enjoyable but somewhat short review of Gazza's time in Italy. There is nothing much new here, anecdotes from previous autobiographies and well known vignettes. Yet James Richardson (acjimbo) manages to convey the genuine love the Italians and some British had for Gazza in the 1990s.

The thesis that Gazza was a flawed genius who only wanted to be loved is well trodden and doesn't add much to this short book.

Would recommend especially if a fan of James Richardson

A great insight to Gazza's time in Italy. Exploring all aspects of the man, player and circumstances. Well read too

Thanks really enjoyed this audiobook. Well written, researched and read. It really illuminated a part of football-history I had previously know little about. It’s relatively short run time was also great, because it offered a compelling narrative rather than endless pages of information.

brilliant summary of a great and misunderstood man

really enjoyed this read about a snapshot in gazzas life, written and narrated by people who knew him so well. a must read for anyone who is a fan of football or the great man himself. an honest yet reflective view of his time in Rome.

Great short recap of Gazza's time in Italy. More an essay than a book, and plenty of room to go deeper.

enjoyed this book from start to finish, well narrated and genuinely interesting story on gazza

Entertaining subject. Well written. Perfect choice of narrator. The line referring to Cm and Gazetta was so on point.

Interesting but ruined by awful narrator

I know this is shook about Gazza in Italy but why does the narrator feel the need to keep using his awful Italian accent every minute. - It’s not like he’s using a Geordie accent every time. He quotes Gazza. Completely ruined the book with his awful constant insurance on pronouncing every Italian word like a knock off super Mario character.

Great look-in at his 3 years at Lazio that doesn't focus on the seedier stuff.