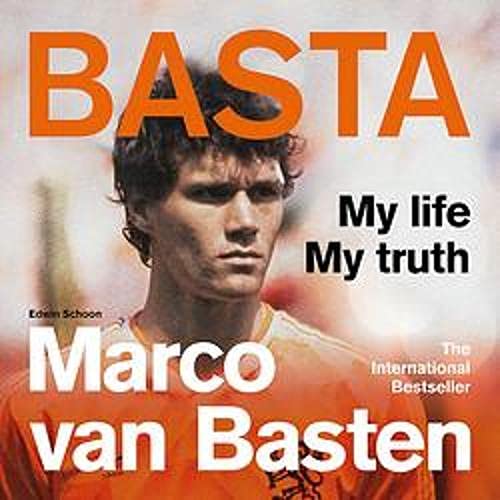 Triple European Footballer of the Year. Once World Footballer of the Year. European champion of two UEFA Super Cups, European champion with the Dutch National Team in 1988 and numerous national championships with both Ajax and AC Milan. Marco van Basten is known as one of the greatest footballers of all time, but his personal life has always remained somewhat of a mystery, until now.

Basta is the raw, honest, but above all gripping autobiography of Marco van Basten.

It's the unfiltered story of his rise to fame, from being under the wing of Cruyff and experiencing life as an Ajax player to being propelled into the spotlight following Euros '88 - and scoring the greatest goal ever to win a major final - and playing for AC Milan at the peak of Italian football's popularity.

But despite countless successes, Marco van Basten experienced many low points, including losing a childhood friend, battling with pain after his numerous fluffed operations and ultimately coming to terms with life after playing football.

Basta is his story.

What listeners say about Basta

A fascinating insight into one of football’s greatest players.

This tells the story of one of football’s greatest players, and possibly the greatest striker who ever lived.

A serious, honest and sometimes self critical work that would have received five stars if it was narrated by Van Basten himself

I found this to be a great listen, with many interesting insights. Growing up Marco was my favourite striker and to hear from him how his career developed with the highs and the lows was fascinating.

Genuine great story in all ways. More than a sports story from one of the greatest.

The Fragility of Perfection

I was captivated listening to the reflection of one of the greatest, who was before my time.
An absorbing delve into a mature man with perspective, healing, repentance and one in a million look into the invisible tension between mind, heart and body, winning at the highest level, losing out on what is destined and how sensitive can be the difference.
Van Basten shares with us, in an all too human way, what the highs, lows and everything in between really, really mean.

Marco van Basten was my idol growing up and this book is a great insight into the life and career of the greatest striker to ever play the game. Its tragic that his career ended when it did at such a young age. His book tells of the highs and lows in his career and personal life. Its a fantastic listen and would highly recommend it. 5 🌟