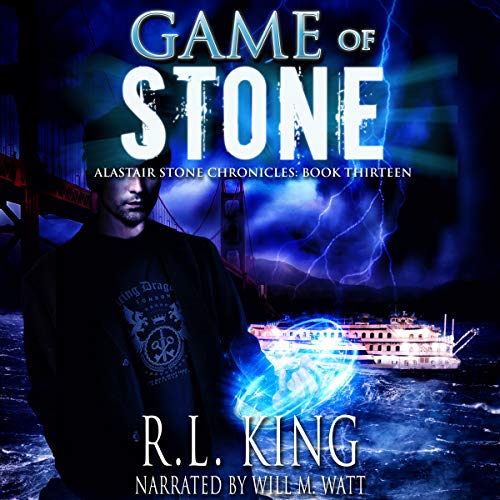 He’d gladly trade a big chunk of his newly-acquired fortune for a few uninterrupted weeks of rest, but that’s not going to happen. On top of dealing with his new magical status and a relationship heading in unexpected directions, he soon learns the bombshell revelations about his family aren’t even close to over yet.

As if all that weren’t enough, an ancient and malevolent set of magical game pieces has resurfaced, leaving a trail of murder and mayhem in its wake. Stone must join with some unlikely allies, including a mundane cop and an all-female vigilante gang, in a desperate race to gain the upper hand before thousands of people are dead.

In this game, losing is not an option.

What listeners say about Game of Stone

AWESOME. AS GOOD AS EVER.

Alastair Stone going all out to save the people from evil. Despite problems of his own, he still strive to help others in need. He is my idea of a hero. Verity is a interesting too. Loving Alastair and at the same time still in willing to make a decision. Jason is also back and I am glad the team is together again. R L King is indeed a talented writer. Will M Watt do justice to the story with his marvellous performance. I hope Ms. King will continue to write more adventures of Alastair Stone and I will continue to collect the books in my library. Excellent series!