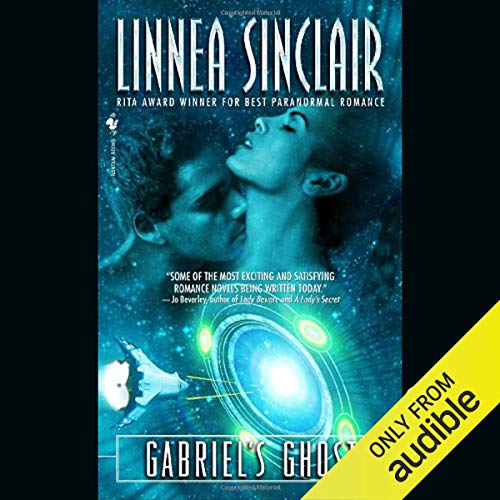 After a decade of piloting interstellar patrol ships, former captain Chasidah Bergren, onetime pride of the Sixth Fleet, finds herself court-martialed for a crime she didn't commit and shipped off to a remote prison planet from which no one ever escapes. But when she kills a brutal guard in an act of self-defense, someone even more dangerous emerges from the shadows. Gabriel Sullivan alpha mercenary, smuggler, and rogue is supposed to be dead. Yet now this seductive ghost from Chazs past is offering her a ticket to freedom for a price. Someone in the Empire is secretly breeding jukors: vicious and uncontrollable killing machines that have long been outlawed. Gabriel needs Chaz to help him stop the practice before it decimates Imperial space. The mission means putting their lives on the line but the tensions that heat up between them may be the riskiest part of all.

What listeners say about Gabriel’s Ghost

Sinclair's style could be compared to what sort of novel might turn out if David Weber married Amanda Quick. Though Sinclair's writing is not nearly as erotic and Quick's. The story is written in first person. The first person character being a court marshaled starship captain imprisoned on an inhospitable planet, who happens to be a total cougar babe with hair too long to imagine, rescued by a roguish pirate who is more than he claims to be. Hair and mugs of tea are the big past time.... Everyone (guys and girls) brushes and braids each other's hair numerous times in this book. Though there's plenty of intrigue and action to keep anyone interested, the romance scenes could have been a little less "fuzzy soft fluffy pillow talk" and a little more action (Linnea, read more Amanda Quick). But this is a guy writing this. The ships and equipment could use a little more description (Linnea, read more David Weber). But then again, this is a guy reading this.

On the whole. It was an enjoyable story and I look forward to the next book in the series.

Genre (sci fi) romance can either go good or really, really, bad. In this case, we have a solidly written plot, surprises aplenty, a decent heroine with intelligence and logic, and a hero that doesn't have to save her all the time/has his own issues to deal with.

When I read a sci fi romance novel, I always hope the sci fi is the emphasis and has some romance thrown in. That's exactly the balance I found with Gabriel's Ghost. No sex, no alpha male, no idiotic female. Just two people thrown into bad situations who fight their way out using their own unique skills.

The pacing is excellent, with lots of action and adventure to keep you page-turning. In addition, there are several surprises thrown in there that I did not in any way foresee. I especially liked that the author caught the feeling of space and space docks - it wasn't just two people in a spaceship fighting over their attraction, as so often happens. There is a strong over-arching plot and several subplots for the protagonists to explore.

In all, one of the better reads I've had lately and I'll definitely be delving into further novels in this universe.

Of note is the narration. I wish the narrator didn't do accents - the hero's accent sounded like a New Yorker trying to channel British but getting some kind of mangled Australian. It was very off-putting.

Very nice. Both books one and two were fantastic. Loved the storyline, action, was drawn right into it and couldn't stop listening. Was actually annoyed I didn't have the book so I could read faster than it was being read, but the different voices were done quite well by the reader. Loved it. Will buy the books if I ever see them in the book store, despite having it on audio. Is a story I could easily listen to again and again. Lets have it for the scifi romances (there aren't many of them).

I like to listen while I bead. It was a good audible book. Would like to see "Games of Command" as an audible book.

Only gave a 3 for Story because of the constant repetitions of some words. Like 'Obsidian'. I think I got the idea of Sully's eye colour after it was referred to as Obsidian for the 15th time. Pity that wasn't the last time.

Loved the book. The narrator doesn't do such a great job though. The male voices are very unconvincing and Sully's accent and intonation are grating. Still, enjoyed it.

great story but the narrator...

Great story but the narrator can't stay consistent in male voices! Almost ruined it for me. You couldn't always tell what male was talking, like she couldn't keep them straight. Even in the end the narrator got mixed up with leading male and leading female voices. 90% they sounded feminine.

The world building had interesting aspects. Sully seemed manipulative and emotionally abusive. I liked Chaz better in the beginning. I really liked Ren and Chaz's friendship with Ren. All the rainbows and cheesy metaphors made me gag.

What would have made Gabriel’s Ghost better?

Changing Narrator. I don't know if something is wrong with recording or narrator.

If you’ve listened to books by Linnea Sinclair before, how does this one compare?

The narrator went from a normal voice to a high pitched one as if she forgot what the female character sounded like. I still don't know if it was part of the recording itself or if the narrator forgot what the character was supposed to sound like. It may have been the download because I had to download several times.

Linnea Sinclair books have a good storyline but the sound recording itself was bad.