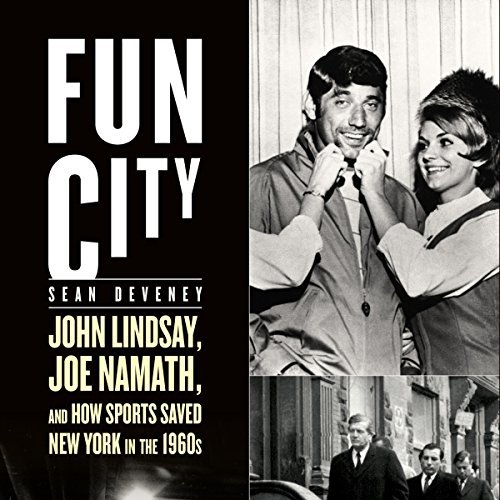 John Lindsay, Joe Namath, and How Sports Saved New York in the 1960s
By: Sean Deveney
Narrated by: Christopher Price
Length: 12 hrs and 53 mins
Categories: Sport, Other
5 out of 5 stars 5.0 (1 rating)

On January 1, 1966, New York came to a standstill as the city's transit workers went on strike. This was the first day on the job for Mayor John Lindsay - a handsome, young former congressman with presidential aspirations - and he would approach the issue with an unconventional outlook that would be his hallmark. He ignored the cold and walked four miles, famously declaring, "I still think it is a fun city."

As profound social, racial, and cultural changes sank the city into repeated crises, critics lampooned Lindsay's "fun city". Yet for all the hard times the city endured during and after his tenure as mayor, there was indeed fun to be had. Against this backdrop, too, the sporting scene saw tremendous upheaval. On one hand, the venerable Yankees - who had won 15 pennants in an 18-year span before 1965 - and the NFL's powerhouse Giants suddenly went into a level of decline neither had known for generations, as stars like Mickey Mantle and Whitey Ford on the diamond and Y. A. Tittle on the gridiron aged quickly. But on the other, the fall of the city's sports behemoths was accompanied by the rise of antiestablishment outsiders - there were Joe Namath and the Jets as well as the shocking triumph of the Amazin' Mets, who won the 1969 World Series after spending the franchise's first eight seasons in the cellar. Meanwhile, the city's two overlooked franchises, the Knicks and Rangers, also had breakthroughs, bringing new life to Madison Square Garden.

The overlap of these two worlds in the 1960s - Lindsay's politics and the reemerging sports landscape - serves as the backbone of Fun City. In the vein of Ladies and Gentlemen: The Bronx Is Burning, the book tells the story of a remarkable and thrilling time in New York sports against the backdrop of a remarkable and often difficult time for the city, culturally and socially. The late '60s were an era in which New York toughened up in a lot of ways; it also was an era in which a changing of the guard among New York pro teams led the way in making it a truly fun city.

Enjoyed listening to this book a lot. Having grown up in the 60s, it is nice to reminisce about things that happened so long ago. Well, maybe not nice. I mean do I wars and strikes and stuff like that. The world hasn’t changed much since then. Just a new set of wars, strikes and racial problems.
My only qualm is with the narrator. Please learn the proper pronunciation of some of the names: Dave Meggyesy, Bob Devaney and Dave DeBusschere