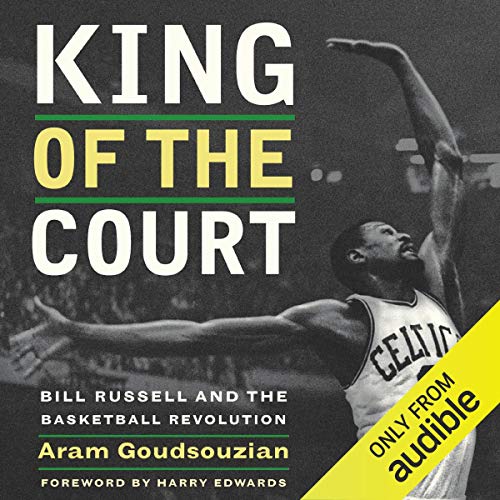 King of the Court

King of the Court

Bill Russell was not the first African American to play professional basketball, but he was its first black superstar. From the moment he stepped onto the court of the Boston Garden in 1956, Russell began to transform the sport in a fundamental way, making him, more than any of his contemporaries, the Jackie Robinson of basketball.

In King of the Court, Aram Goudsouzian provides a vivid and engrossing chronicle of the life and career of this brilliant champion and courageous racial pioneer. Russell's leaping, wide-ranging defense altered the game's texture. His teams provided models of racial integration in the 1950s and 1960s, and, in 1966, he became the first black coach of any major professional team sport. Yet, like no athlete before him, Russell challenged the politics of sport. Instead of displaying appreciative deference, he decried racist institutions, embraced his African roots, and challenged the nonviolent tenets of the civil rights movement. This beautifully written book - sophisticated, nuanced, and insightful - reveals a singular individual who expressed the dreams of Martin Luther King Jr. while echoing the warnings of Malcolm X.

Portrait of a Basketball Revolutionary

Basketball legend, human rights activist, and Medal of Freedom recipient Bill Russell became the first black superstar on the court in 1956. During his thirteen years with the Boston Celtics, they won eleven championships. His defensive style of play changed how the game was played throughout the league.

One of basketball's greatest players had to endure racial epithets while he lead his team to victory time and again—how did this affect him? In the hands of Goudsouzian, who has a knack for bringing the insights of a political scholar together with entertaining storytelling, we learn.

Learn how to pronounce proper names

This is a great book but a very careless production. The producers or the reader did not take the time to learn the proper pronunciation of Reading, Ma, Tom Heinshon, Clyde Lovelette, or even Ballantine Beer. There were a dozen more. Its very irritating to hear this minute after minute.

Bill Russell: A Man in Full!

Bill Russell is the greatest winner of all time. Aram Goudsouzian has written a comprehensive biography that captures the extraordinary depth and breadth of this man! Russell is an iconic and transformative figure not only in athletics but also in American life in the second half of the twentieth century! I cannot recommend this book highly enough! If I have the first pick to start a basketball game, my pick remains William Felton Russell, my all time GOAT!

the true king of his time, character, drive, ambition and a mentor to thousands he will never meet. Thank you