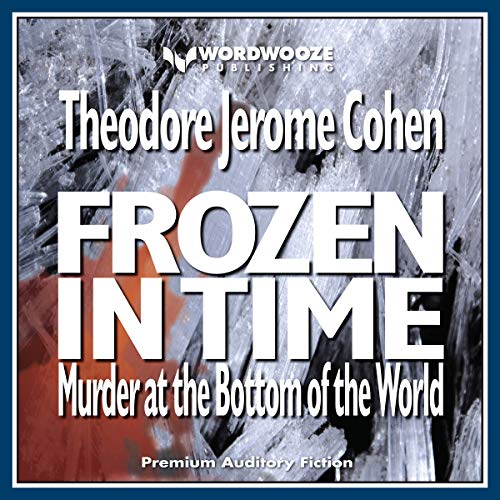 Frozen in Time: Murder at the Bottom of the World

Frozen in Time: Murder at the Bottom of the World

The trail from a major theft at the Banco Central de Chile in Talcahuano following the Great Chilean Earthquake of May 22, 1960 leads to Base Bernardo OHiggins, a wind- and snow-swept Chilean Army outpost on the North Antarctic Peninsula. When Chilean Army 1SGT Leonardo Rodrguez fails to return from a seal hunt in the waters around the base, two Chilean Navy non-commissioned officers, CWO Raul Lucero and CPO Eduardo Bellolio, become LCDR Cristian Barbudos' prime theft and murder suspects. Fearing he will die, Barbudo reveals the identity of his two suspects to visiting scientist Ted Stone, thereby placing Stones life in jeopardy. But who can Stone trust with this information, if it comes to that, to see justice done?

This story is a work of fiction based on real events that took place between 1958 and 1965. It is a tale of greed, betrayal, and murder - one in which the listener is given a window into the frozen world at the bottom of the Earth that few people ever will hear about, much less experience. Among other things, it explores why, though seemingly unfair, bad things happen to good people; how the battle between good and evil can change forever even the most innocent person; and most of all, the role deception plays in nature, man, and life.

What listeners say about Frozen in Time: Murder at the Bottom of the World

Based on scientific fact and absolutely believable

An Antarctic Murder Mystery (Book One) written by an Antarctic Explorer based on scientific fact and absolutely believable – in fact, much of it is nonfiction. I love books that COULD be true and are based in reality, and true information can be learned while listening This book fits the bill. The author says nature was an additional antagonist, and that alone would have been enough for an exciting audiobook, but add in a very plausible and complex murder and then you this suspense thriller.

The story was lost if submitted to Playboy magazine decades ago, and we would not be the richer for the trilogy that resulted from the remaining story seed. We just had to wait 50 years.

It starts with Ted and Susan in a car driving to the entrance of Brittingham House which used to be the University’s Geophysical and Polar Research Center. That sounds close to real life as the author’s name is Theodore and he probably had business at polar research centers decades ago. Such an experience in an extreme climate makes a great setting for a story. With so few characters it seems no one could have been guilty, making the story quite a puzzle. Everyone had responsibility helping the others (and themselves) stay alive while in Antarctica.

This is one of the books with twists and turns and no way to know who the “bad guy” really is in the mystery. Each person has remarkable credentials and acts so plausibly good.

A strong storm provides an opportunity for a few characters to obtain the equivalent of 12 million U.S. dollars, but no opportunity to spend the money without being found out. Suddenly having that much money anywhere would be suspicious, but outstandingly so in a very low population area. Deciding it was all or nothing, and not being satisfied with just some of the jewelry and coins, sets the stage for more mystery. What could be done with that amount of money and one local bank, anywhere? Clever thinking and patience were required.

In the meantime, scientific information and discussion among the crew add interest to the story. Everyone carries a huge amount of responsibility which adds tensions to many scenes. The descriptions of the housing, science labs and meals will leave you happy to be wherever you are now (if not already in Antarctica). All of this takes place close to 1960 where typewriters and not computers are the latest technology to help support their survival. And how is crime involved? Doesn’t everyone know everyone at the South Pole?

When the team is in Lima eating in nice restaurants, still in Miami, or other exotic (to Minnesota me) moments of relief from the extreme cold, but those locations are only in the beginning of the story. Enjoy them while you can. I suggest listening to this near the fireplace, somewhere sunny, or running the space heater to keep from virtually freezing while listening to this book.

This story really surprised me. Since it’s the first book in the series there was a lot of back story and characters introduced but still had me intrigued. It introduced me to a whole new world as I had no idea what it would be like in Antarctica and then adding to the dangers of the elements you have murderers and greedy thieves. I had tears in my eyes at one point!
The narration wasn’t my favorite but it didn’t stop me from wanting more of this story.
If mystery and murder are your things I would recommend this book.

I really liked listening to this story and look forward to reading more from this author. My blood boiled as the murders of convenience were committed.