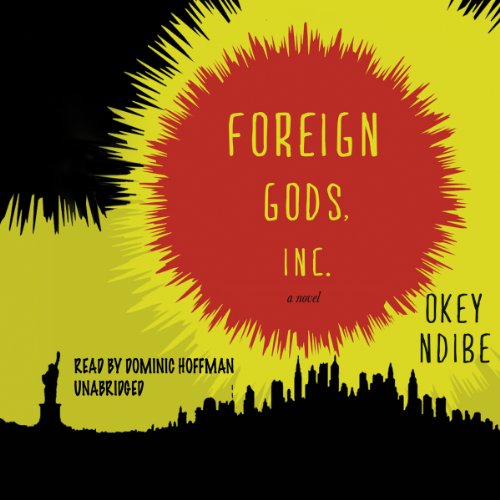 By: Okey Ndibe
Narrated by: Dominic Hoffman
Try for £0.00

Foreign Gods, Inc. tells the story of Ike, a New York-based Nigerian cab driver who sets out to steal the statue of an ancient war deity from his home village and sell it to a New York gallery.

Ike's plan is fueled by desperation. Despite a degree in economics from a major American college, his strong accent has barred him from the corporate world. Forced to eke out a living as a cab driver, he is unable to manage the emotional and material needs of a temperamental African American bride and a widowed mother demanding financial support. When he turns to gambling, his mounting losses compound his woes.

And so he travels back to Nigeria to steal the statue, where he has to deal with old friends, family, and a mounting conflict between those in the village who worship the deity and those who practice Christianity.

A meditation on the dreams, promises, and frustrations of the immigrant life in America; the nature and impact of religious conflicts; an examination of the ways in which modern culture creates or heightens infatuation with the "exotic", including the desire to own strange objects and hanker after ineffable illusions; and an exploration of the shifting nature of memory, Foreign Gods, Inc. is a brilliant work of fiction that illuminates our globally interconnected world like no other.

I had to re-read this book on paper because the pronunciation of the narrator was so terrible it made it had to concentrate on the story! Couldn't they find someone with some idea how to pronounce even one single Igbo word?
That said, it's a great story and I love the ambiguous end. But buy the paper edition not this audiobook.

Started out interesting but was a letdown overall

I wasn't impressed by the Narrator and how much was butchered. I wish there was more exploration of the remorse and lessons learned from the sale of the God. The abrupt drop of the ending left an unsatisfactory taste. First audiobook I've listened all the way through, and I don't like the feeling it left me with. I had some chuckles throughout the book but it was more of a drone to get through with it.

This book kept me inquisitive of the next chapter , hoping to see what became of Ike and his quest for quick money at expense of his community god.

The story itself was interesting I guess but it's slow. With the narrator, the story REALLY moves even slower. It took me forever to get through this book. Maybe it would be better to read the actual book?