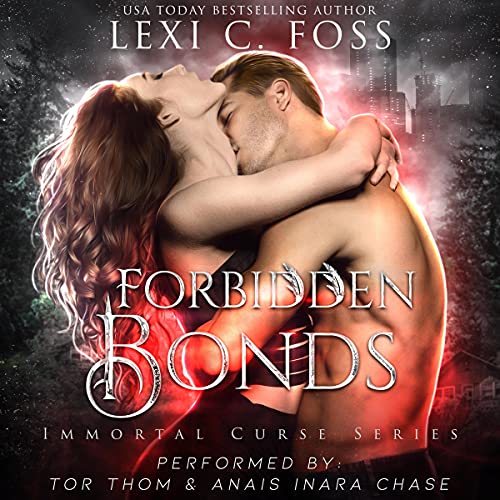 Tom's a trained sniper, not a babysitter. He kills rogue immortals for a living, but after releasing classified information to a friend, he's banished to a remote location with the CRF's most prized asset.

Can two tortured souls find solace and love in one another?

Secrets unfold as Tom forms a forbidden relationship with his new charge. The immortal woman evokes memories and feelings long forgotten and forces him to question everything he's ever known.

Sacrifices must be made.

A rash decision sends them both running for their lives as enemies vie for their heads.

Some bonds are meant to be broken.

Blue fire glared up at him. "I would like to shoot you now."

The threat was so unexpected and said with such venom, he couldn't help but laugh. "I'd love to see you try."

"I'll more than try." She sounded so confident. Too bad she didn't stand a chance.

"Hmm." He settled more heavily on her by stretching his legs alongside hers and going to his elbows on either side of her head. Danger instincts flared through his brain while heat licked through his veins. "And then what?"

Her glare cooled as her gaze dropped to his lips. "I would run." Some of her earlier confidence seemed to have disappeared. Smart woman.

He toyed with the loose strand of her hair lying beside his hand. "Probably a good idea considering you'd miss, and I'd be chasing you. Can you do me a favor, though?"

She blinked up at him. "What?"

"Try not to run in circles. It takes the fun out of things."

What listeners say about Forbidden Bonds

Secrets starts to unfold and nothing is as it seems

I absolutely love reading this series and then following up with the audio to be able to enjoy it again is fantastic.

Brought to life by the narrators Anais was fantastic throughout, Tor was amazing for his male roles, not so hot for his British female at times. But I think that’s more on me as I’m a Brit and the British accents can sometimes grate on me when they’re not done right. That does not however deflect from the story, This is still fantastically written.

Secrets starts to unfold and nothing is as it seems.

This series is really starting to unfold.

Tom and Amelia’s is one of learning to trust when you have been broken almost to the point of no return. Taking you to some dark places in your mind.

Working out what’s truth and lies is the hardest part.

Amelia’s been through so much in the 6 years she’s been taken, and still there’s more to come.

Tom’s given the responsibility to ensure the asset is kept out of sight, whilst still enduring testing, however he’s not entirely happy with the situation....any of it.

Secrets starts to unfold and nothing is as it seems.

This was a great read, more of the lies are unveiled, giving you pieces of the bigger picture, but still not enough, so many questions unanswered, leaving you wanting more. Can’t wait to jump into Blood Heart when released on audio.

I really love Amelia and Tom's story. I had already listen to it like twice already, but now with the new dual narration is even better.

I loved that now we get to hear Amelia's voice, and Anais was wonderful narrating her character. This was my first time listening to her and I absolutely adore it, she was just perfect for her.
As for Tor Thom, well he's fabolous and was amazing for Tom character.
I really really loved this new narration it was perfect and really enjoyable.

Re-released audiobook with dual narrators (and a smoking hot new cover). This enemies to lovers story is even better the second time around, bumbling it to a solid 4.5. The new narrators (dual M/F instead of the previous single narrator) add more depth to the characters, and now that I’ve read this series through what’s been released to date, I have a different perspective/appreciation for Tom and Amelia. Will they ever be my favorite couple in the Immortal Curse series? No. But do I enjoy their banter and chemistry? Absolutely! Thai book does a good job in continuing to l’y out the game pieces for the over-arching story that is True Immortal Curse series, especially when Tom & Amelia reconnect with the rest of the characters. As always, the elders are pure joy, and it’s fun to re-live some of the other characters before their true purpose and motives are revealed. Lexi’s audiobooks are always fantastic, and this is no exception.