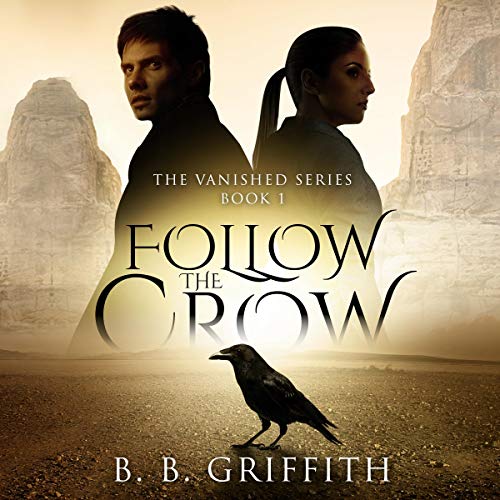 By: B. B. Griffith
Narrated by: Paul L. Coffey,Kirsten Leigh,Ryan Jordan McCarthy
Try for £0.00

Ben Dejooli is a Navajo cop who can't escape his past. Six years ago his little sister Ana vanished without a trace. His best friend saw what happened, but he refuses to speak of what he knows, and so was banished from the Navajo tribe. That was the day the crows started following Ben.

Caroline Adams is a nurse with a special talent: She sees things others can’t see. She knows that Ben is more than he seems, and that the crows are trying to tell him something.

What the crows know will shed new light on the mystery of Ana’s disappearance, and throw Ben and Caroline into a race against time to find out what happened before they end up vanishing just like she did.

I had expected this to be centered with the Navaho and to be metaphysical or mystical, but it is actually closer to fantasy. The writing is good, if a bit simplistic at times, the scene in New York was very quick, there you go, as if it was just thrown in to correct the arc if the story.

Multiple narrators, both in the story and doing the audible, can often cause problems, but it didn’t bother me here.

I will give the next book a try. Hey, I am sheltering in place because of CoVid19 so what the heck.

Engrossing storyline with touches of Navajo magic/lore, presented by multiple 1st person internal dialogs. Easily pulling you into the follow up stories.

I have always enjoyed paranormal types of books. This one hit the mark especially by including Indian lore. I look forward to vanishing 2

Fizzled out rather abruptly.

I loved how the story started. Unfortunately it fizzled rapidly toward the end. The narration was on point.

Lots to think about

what a great story set in a part of the country about which I know very little. interesting philosophy and spiritual gambit. I like the alternating story personalities--keeps it interesting.

Love it and want more of the same

Will read it or listen to it again. will purchase more of the same from the Author

Reader made listening difficult...I felt like I was listening to a Micky Spellane novel not a story set in the Navajo Nation.

Good story, but flawed by narrator and vision

This was an interesting story, and I did eventually get hooked to the point that I want to read the next book. But there were some flaws that were hard to overlook. The first being that the narrator for one of the main characters, Ben, was clearly a white person. The Narrator should have been Navajo or at least a Native American to make him more believable. I absolutely flinched everytime this narrator mispronounced the word "Hogan". He even mispronounces "Navajo", in a way no Navajo would say it. This implies that the author, or narrator, really doesn't know their subject matter as much as they should.
I did enjoy the female narrators. Although there seemed to be an attempt to represent Navajo culture, throughout this fictional story, I thought parts of this were very distorted and may give people the wrong impression. If you are going to talk about a particular culture and people you should at least do enough research to get the information accurate. There have been a number of authors who have done this successfully. I have a deep respect for Native American and especially Navajo culture and I was disappointed that there didn't appear to be enough respect to portray this accurately. Because of this I have to give this book a very mixed review.

Three Quarters of a win!

I am of Native American descent so I am not unfamiliar with the medicine. B.B. Griffith's story was pitch perfect, like Tony Hillerman, for the first three quarters of the book and after the ceremony at the hogan's he seemed to lose the rhythm and the thread. From the last hospital scene on I had no idea which plane anyone was on and what exactly they were doing there. Then there was the crow that talked like Jimmy Durante...and then I guess Carolyn attached herself to the doctor because she was fond of him. Ok...then...take your awesome talent and write somemore.

Follow the crow is full of mystery, beliefs and adventure.
A must read, well written with great characters.