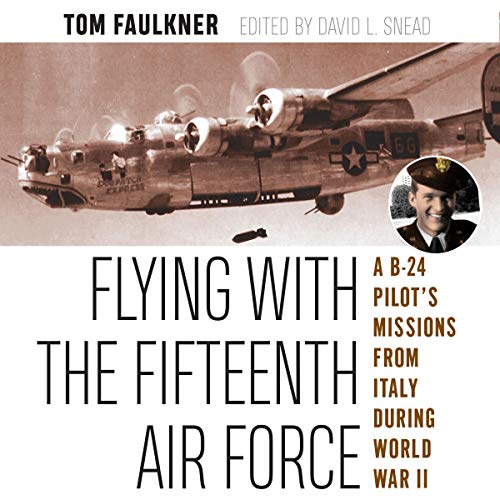 Flying with the Fifteenth Air Force: A B-24 Pilot's Missions from Italy during World War II

In 1944 and 1945, Tom Faulkner was a B-24 pilot flying out of San Giovanni airfield in Italy as a member of the 15th Air Force of the US Army Air Forces. Only 19 years old when he completed his 28th and last mission, Tom was one of the youngest bomber pilots to serve in the US Army Air Forces during World War II. Between September 1944 and the end of February 1945, he flew against targets in Hungary, Germany, Italy, Austria, and Yugoslavia. On Tom’s last mission against the marshaling yards at Augsburg, Germany, his plane was severely damaged, and, while attempting to fly to safety, he was forced down in Switzerland, where he and his crew were interned.

The 15th Air Force generally has been overshadowed by works on the 8th Air Force based in England. Faulkner’s memoir helps fill an important void by providing a first-hand account of a pilot and his crew during the waning months of the war, as well as a description of his experiences before his military service. David L. Snead has edited the memoir and provided annotations and corroboration for the various missions.

“The overwhelming majority of reminiscences by bomber aircrew are about 8th Air Force, so this work is refreshing. It is very readable, engaging, and educational.” (Robert S. Ehlers Jr., author of The Mediterranean Air War and Targeting the Third Reich)

What listeners say about Flying with the Fifteenth Air Force: A B-24 Pilot's Missions from Italy during World War II

I grew up in Dallas & can recognize the names of businesses, streets, universities & dates as it relates to Dallas. I appreciated the 7th AF perspective however this book turned into a personal memoir of growing up in Highland park & not everyone had it as easy as the author.