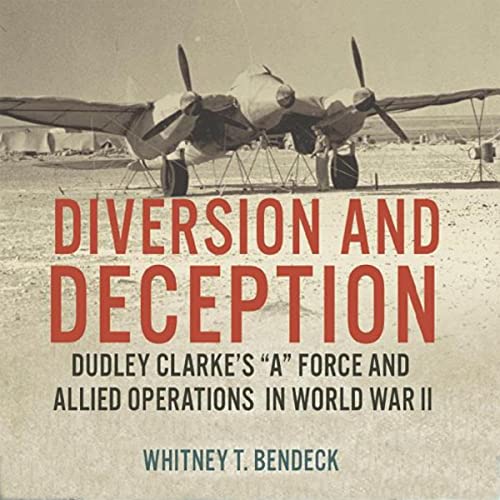 By: Whitney T. Bendeck
Narrated by: Mark Sando
Try for £0.00

Among the operations known as Plan Bodyguard, the deception devised to cover the Allies’ Normandy landing, was the little known but critical Plan Zeppelin, the largest and most complex of the Bodyguard plans. Zeppelin, in conjunction with the Mediterranean Strategy, succeeded in pinning down sixty German divisions from southern France to the Balkans in time for D-Day. This was the work of “A” Force, Britain’s only military organization tasked with carrying out both strategic and tactical deception in World War II. Whitney T. Bendeck’s Diversion and Deception finds “A” Force at its finest hour, as the war shifted from North Africa to Europe.

Focusing on the years 1943 to 1945, Bendeck describes how “A” Force, under the leadership of Dudley Clarke, orchestrated both strategic and tactical deception plans to create notional threats across the southern perimeter of Europe, with the chief objective of keeping the Germans pinned down across the Mediterranean. Her work offers a close and clarifying look at “A” Force’s structure and command, operations and methods, and successes and failures and, consequently, its undeniable contribution to the Allies’ victory in World War II. By shining a light on the often overlooked Mediterranean theater and its direct connection to European plans and operations, Diversion and Deception also provides a deeper understanding of Allied grand strategy in the war.

Combining military and deception histories - so often viewed in isolation - this book provides context for the deceptions and adds a layer of knowledge regarding the planning of military operations. The result is a more complete and nuanced view of Allied operations than is to be found in most histories of World War II.

What listeners say about Diversion and Deception