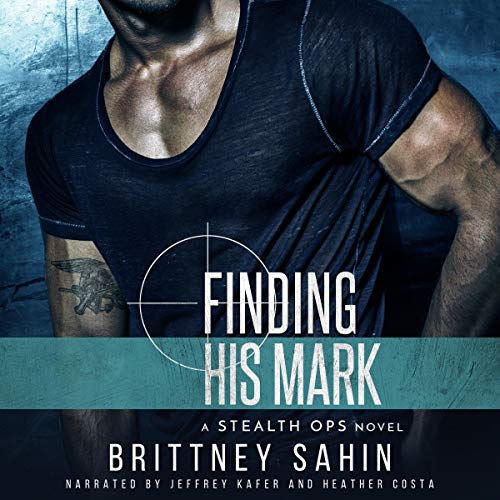 By: Brittney Sahin
Narrated by: Jeffrey Kafer,Heather Costa
Try for £0.00

She's crashed the biggest party of her life, and she's about to pay the price.

As the leader of an off-the-books black ops SEAL team, Luke Scott can't afford for anyone to discover the truth about who he is or what he does. But when a critical mission gets botched by a member of an iconic Hollywood family, he'll have to fight to protect his team's identity, as well as keep himself from falling for the woman who's turned his life upside down.

Eva Sharp's the writer and co-producer for the hit TV series SEAL Security. While on break from filming, the last thing she expects is to end up in the middle of a real-life action scene - one that puts her life on the line. At first, she's not sure if she can trust this stranger in the mountains, even if he has military written all over him. But the more time she spends with him, the harder it is to fight the pull of attraction, without also jeopardizing his op.

They'll soon realize not everything is as it seems, and Luke will be forced to discover how far he's willing to go to find his mark.

The Stealth Ops SEAL Team - Navy SEALS who handle covert ops for the president in the US and around the world - under the guise of an alias, Scott & Scott Securities.

Each book in this action-packed romantic suspense series can be listened to as a stand-alone and begins with the recruitment process for that particular SEAL.

What listeners say about Finding His Mark

So much better than I imagined

I have read this book many times but to listen to it was amazing.

The male narrator sounded just as I had imagined Liam.

The female one I was sure on for Eva but the more I listened the more I loved her (much like the character Eva also 😘).

Liam is strong masculine loyal. Him falling in love is not in his plan. He does, he falls for her, fights for her and wins.

The steamy scenes are so hot in audible. The bonds, family ties and team work show through in this.

5 stars cannot fault it. Can't wait for book 2 in audible.

After reading all the stealth ops books I decided to give the audio book a try and I was not disappointed! I would highly recommend this audio book

I loved this book the first time I read it so when I got the audible I was so excited! The narrators did a wonderful job. It made me realise why I liked the book in the first place. It enhances the experience to no end. I can’t wait for all Ms Sahin’s books to be on audible I’ll definitely be listening to all of them now. Great job.

I loved this story. i have been a fan of Brittney Sahin for some time so have been really excited to listen to this!!! such great listening. I loved that it was from the 2 main characters perspectives making it easy to stay hooked, engaged and eager for the next chapter!!!

Apparently, classified information can be given up if you just ask a lot of questions. It's ok to tell someone from Hollywood because she already deduced you were not your cover story. And since she knows so much now we might as well involve her completely in our operation.

This author is a first for me. I enjoyed listening to Jeffrey Kafer and another first Heather Costa. Both narrator's performances were well done. The story had what I liked: Romance, Suspense, Sex (ha) , mystery and HEA. And you could listen to this as a standalone or go on to the next audiobook in this series. Enjoy 😄

Loved this story! Loved the characters, I have read the book too! Great choice of readers.

Love this series so much!

I love Brittney’s characters so much I’ve read them all and am now listening to them again! You will not regret reading any of her books!

He found his mark

This is a great SEAL TEAM/OPS type read! The characters were a great blend and the storyline was so very good! I love the action and the romantic part! totally recommend this!

The audio version of this book adds an incredible layer of creativity to this fantastic read. You can feel the intense push and pull between Eva and Luke as the narrators read the story. I’ve always loved this book, but the narration brings the story to life on a different level. I would love to see this book made into a movie someday. I highly recommend listening to the audio version of this book especially if you enjoy listening to a sexy man’s voice such as Jeffrey Kafer. Heather Costa is a new narrator to me, but her voice is pleasant, persuasive and passionate making the story through Eva's eyes quite enjoyable.

Everly “Eva” Reed longs to be seen for who she truly is and not for the family fortune tied to her last name. Eva makes a new life for herself, working as a writer & co-producer on the set of a hit TV series about Navy SEALs. Luke is a Navy SEAL recruited by his former-CIA sister to run a stealth ops group that answers to the highest levels of authority - often with direct orders from the president and off the books missions in order to keep the US safe. Luke lives and breathes fighting for his country so much so that he has no room for anything else in his life. After all when you’re the co-leader of a special ops unit and you’ve explicitly told them not to have any long term relationships unless they want to be cut from the team, you have to set the example, right? Wrong. When an op goes south, Eva is caught in the middle of it all. Forced to kidnap Eva in order to keep her safe, Luke begins to develop deep feelings for the beautiful woman. Eva questions Luke at every turn, desperate to know what’s out to get her and to be included in his exclusive world. Secrets are revealed that change the members of the special ops team lives forever, and Eva is forced to make a difficult choice. Will her decision make or break Luke & Eva? When all hope seems lost, will the team agree to trust a civilian with their lives and bring her into their ranks?

I love Eva and Luke’s story! I have read the book and now been able to listen to their story too! I forgot how much I loved the stealth ops books! Eva, a woman who is struggling to make a name for herself through a career in the movie industry, without using her family name, shows to her personal cabins in the woods early. She meets Luke, a man who has a hidden life as well. He is on a covert mission and she winds up in the middle. Their story has so many twists and turns while they try to figure out all of the hidden truth of this op. When I read & listened to the story I was shocked about what happened during the operative and I loved finding out how Eva and Luke’s personal life concluded in the book. I can’t wait to listen to all of the Stealth Op series and other books by Brittney Sahin!

SEAL me with some intense chemistry

I read this book months ago and really enjoyed it. However, when I was able to listen to it, the story became fuller and more enthralling. Characters Luke & Eva were easier to imagine and their banter seemed even better. Let’s just face it, Alpha males are HOT when written by Brittney Sahin and Luke certainly did not disappoint. I didn’t expect his soft, caring, and thoughtful side, but instantly was won over with the fuzzy socks. Loved the talks Eva had with his fellow teammates when their on a mission. I can’t wait to read the stories of those other Alphas. So glad that Luke realizes love is worth it in the end and Eva realizes she doesn’t have to hide. Recommend this book highly in both avenues, but listening to it definitely took it up a notch.

Exciting Action Packed with a side of romance

I read Finding His Mark first and fill in love with Brittany Sahins writing. Reading the book first gave me a great vision in my head of what was going on but listening to the words come together from the action to the romance made everything come right off the page with even more excitement. I caught myself whispering to the men/women when they were on missions and laughing and all the banter going on with the team. Luke and Eva have serious chemistry from the start. I couldn't stop listening to this action packed romance. The two person narration made her words come to life and made me feel like i was there in the story. Brittany's knowledge of SEAL teams was outstanding and made it feel real. I will cant wait until the rest of the Stealth Ops books come out in audible. I recommend this book over and over! Its a must READ/LISTEN!!

I was given a free copy of this Audio for an honest review.

I've read this series and listening to this audio just brought the story more to life. Just listening to it I forgot how stubborn Eve was with not listening to anything Luke says to her. There were a couple times I was yelling at Eve to just listen at the beginning.

Just knew that you have Eve a headstrong women and Luke our sexy Navy Seal. These two make an amazing couple. Hope you enjoy it too.