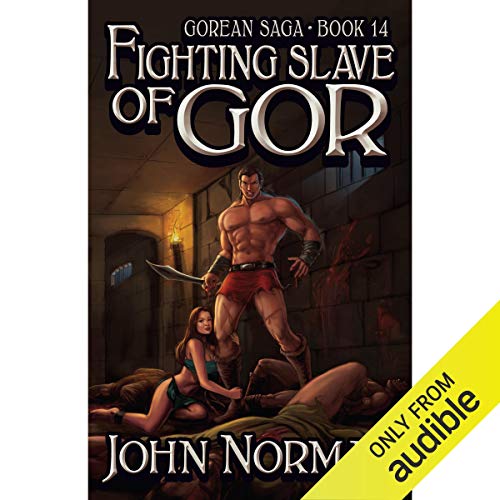 Emotionally lost, Jason Marshall finds himself thrust into a lengthy struggle to save his beloved from slavery on an Earth-like world called Gor. Kidnapped and helpless, Jason begins a life on Gor as a slave and becomes a prominent warrior. He must battle his way to freedom, if only to liberate his love from the clutches of the alien slave emporium. Will Jason overcome the numerous obstacles he encounters? Will he ever reunite with the girl he loves? Can he survive the trials and tribulations he must endure on Gor?

What listeners say about Fighting Slave of Gor

Having read most of the saga on ebook, I really love the 3 involving Jason. It gives a nice change from Tarl.

the readers voice is so robotic that he makes this story sound a million times worse than it is. No changes of tone or pitch no understanding of the characters humor.

its a gor book

The story starts off pretty slow having to introduce a new protagonist (Jason) but stick with it, I enjoyed the second half of the book most.

Jeremy Arthur needs to work on a few of his side characters a little, overall his youthful voice suits Jason well.