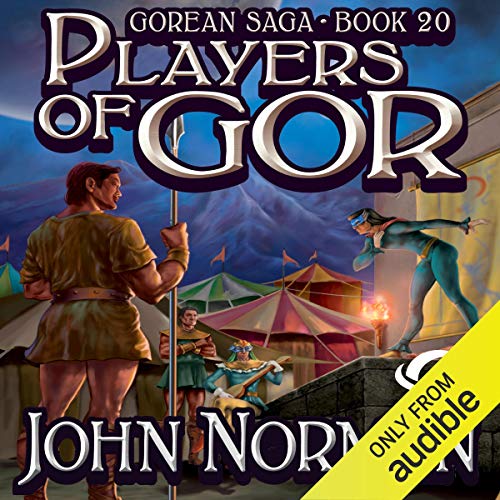 John Norman's epic Gorean Saga is one of the longest-running and most successful series in the history of fantasy. It is also one of the most controversial. Over the course of more than 30 books produced over a span of six decades, the series has sold millions of copies and built legions of fans unrivaled in their devotion. Audible invites you to rediscover this brilliantly imagined world where men are masters and women live to serve their every desire.

Players of Gor, book 20 of the Gorean Saga.

The games of Gor are diverse, as are their players. There are the games of planetary politics, in which worlds are contested. And those of cities and ubarates, of ponderous cavalries and fleets of lateen-rigged ships. And smaller games, bloody games, played on a square of sand, in which the counters and pieces are edged weapons. And, too, there is Kaissa, common on Gor, played with pieces of wood, on a board of a hundred squares. The major land power in the northern latitudes of known Gor has long been the imperium of mighty Ar. Against her hegemonies on the continent, plans by her major enemies, the maritime ubarates of Cos and Tyros, have been carefully drawn to involve attack from without and subversion from within. Cabot, once of Earth, is drawn into these intrigues.
©1984 John Norman (P)2013 Audible, Inc.

What listeners say about Players of Gor

Too much pontification too little story.

On the negative side, J. Norman spends altogether too much text expounding on his views of Gorean male/female dynamics and the Master/Slave relationship. It is repetitive in this aspect to the point of becoming tedious. Far too much time is spent expounding upon the details and propriety of the strong dominate male/abjectly subservient female roles, to the detriment of the book as a whole.
On the positive, the story, what there is of it, is entertaining enough involving a nice departure from Tarl's ( aka Bosk of Port Kar) usual sword swinging adventure to one involving some of the other strata of Gorean culture featuring characters that are in their own way every bit as cunning, creative, heroic, and proud as he. I only wish Norman had focused more on this aspect of the story and less on the other.

Players of Gor or Players and Salves of Gor?

I would be very hesitant about recommending this as a read to anyone. I would NOT recommend this book as an introduction to Tarl's adventures in Gor. It's lacking. Why? Because the book doesn't focus on the Players of Gor. For sure, the actual Players' characters are formed well. But not as great as Nomads of Gor. Not even close. That goes to the writing and background he's given to the characters of Nomads of Gor. In Players of Gor, the characters have a background. But there's little love if they live or die.

The "Monster's" identity was predictable... If you have read the previous books. Tarl seems to be a buffoon at times. I didn't think this went along with this previous thought processes and decision making. I understand John Norman is attempting to paint flaws into Tarl. However too many too quick. And very very poor choices. It was obvious he was being marked the moment he received the ribbon. It was obvious he was being laid into a trap when the free woman kept showing up around him, in what was supposed to be a "Rio-ish Carnival" atmosphere.

Most was Taskboot. Least was the woman who ended up being drugged and tied under a table (trying not to give anything away).

What does Ralph Lister bring to the story that you wouldn’t experience if you just read the book?

He brings the imagination of the character's persona to the forefront.

Maybe. The "Game's" aspects were interesting. It would be nice to see how the game is actually formed in reality. They way the book went into it was well done.

Overall this book was disappointing. It did have some good parts. But I see that it's the beginning of a new adventure for Tarl.