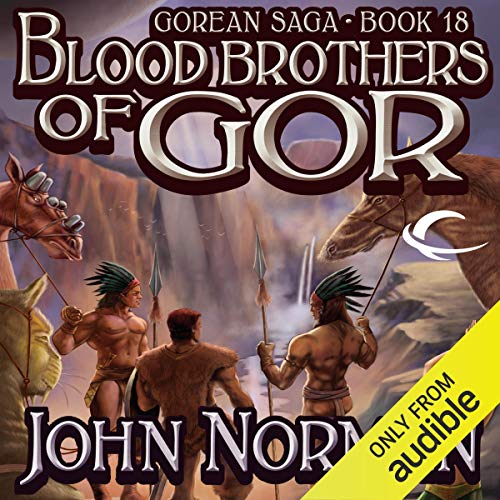 In this book is concluded the adventure which began in the 17th book in the Gorean series, Savages of Gor. Half-Ear, or Zarendargar, a Kur general fallen from favor in the Steel Worlds, now sought by a death squad of his savage compeers, has determined to lure his pursuers into the Barrens, the vast prairies to the east of known Gor, populated by warring tribes known to Goreans as the Red Savages. He has arranged matters in such a way that he will be abetted in his stand against the death squad, and its human allies, by a human ally of his own, his former foe, Tarl Cabot. The ancestors of the Red Savages, as those of many other Goreans, were brought to Gor long ago in Voyages of Acquisition by the Priest-Kings. The Red Savages were settled in an area not unlike that of their former home, a sweeping, almost endless grassland, where they tend to continue their former ways of life, and war. The various tribes have in common a tradition, or myth, called the Memory. And in virtue of this tradition, myth or memory, they entertain an inveterate hostility to lighter-skinned races. Cabot makes his way into this land, and amongst these tribes, in his quest for Zarendargar, he encounters enemies and perils, conflicts and hatreds, and, ultimately, friends. And meets once more the dreadful Zarendargar.

Coinciding with the 40th anniversary of the first book of the Gorean Saga, Tarnsman of Gor,, E-Reads is proud to release the very first complete publication of all Gor books by John Norman including the long-awaited 26th novel in the saga, Witness of Gor. Many of the original Gor books have been out of print for years, but their popularity has endured. Each book of this release has been specially edited by the author and is a definitive text.

What listeners say about Blood Brothers of Gor

In search of one with whom he once shared Paga. 2

Savages and Blood brothers are really one story. Savages contains more of Tarl's internal dialog, and marks a turning point in the character's mind. It can be very harsh to listen to, and if there is one novel up to this point that a reader may find objectionable, Savages is the one. Blood Brothers is somewhat less harsh. Tarl travels to the Barrens of Gor, one again without the approval of Priest King go-between, Samos of Port Kar. This area is inhabited by tribes of the "Red Savages" (remember this term is supposed to be translated Gorean) who permit very few white outsiders. There are a number of very memorable characters, and by the time one gets to Blood brothers, Tarl has begun to work out some of his long term internal issues. If one has followed him this far, the turning point in his internal dialog, told to us whether we want to hear it or not, is a welcome change. There are some lessons to be learned in Blood brothers that have nothing to do with Gor, Slavery, or Sexuality. The author lets some of his background come though here. I will not comment on his identity, he isn’t someone famous, and it is not secret. I mention this because I know that knowing the author’s real name, day job and education can be a spoiler for some readers. I'll insert this comment here too.

In the late 90's I was offered the opportunity to be a "go-for" assistant to Mr. Norman, but his wife (yes, wife...) became ill and he cancelled his lecture. I've always regretted this, but now I'm glad it didn't happen. He was going to speak on the subject of censorship. Tarl is speaking here, not Norman, and one must remember this. I'm read-reading the entire Saga again so that I can catch up where the series once ended (Magicians.) I have many issues with the subject matter, but that is how these books are intended. You haven’t read this far if you can’t cope with that. Things begin to change here, just a little, and just for Tarl really. Never forget Tarl is speaking, and he tells us everything that crosses his mind. Narrator Lister really brings this out, and I often missed this the first time I read the saga. These stories are all new to me for some reason, and many of my questions have already been answered. Blood brothers of Gor has the adventure that is missing from some of the Gor Novels, and that balance of "Tarl trying to justify his adopted worked to himself, Kajira Making and Gorean Kajira Philosophy" vr. “Tarl fighting the bad guys with interesting companions and beautiful brave women” works much better. Pay attention to some of what Tarl has to say in Blood Brothers, he may surprise you sometimes.