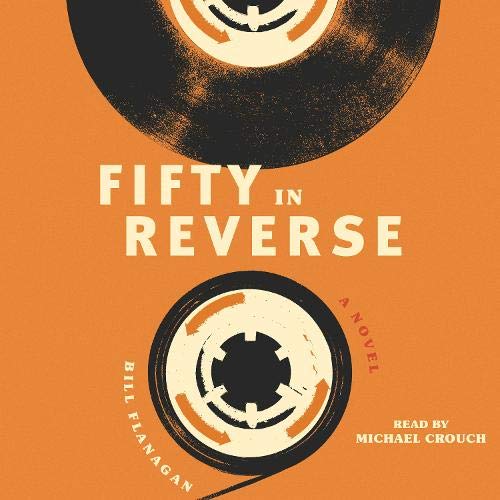 By: Bill Flanagan
Narrated by: Michael Crouch
Try for £0.00

From TV personality and radio host Bill Flanagan comes a "funny and sharp” (Rosanne Cash, Grammy Award-winning singer/songwriter and best-selling author) time-traveling adventure novel about how the past never gives up its hold on the present and how even 65-year-olds are still kids at heart.

If you had the chance to live your life over again, knowing everything that you know now, would you take it? Would you still take it if it meant losing everything you had today? Would a second chance to correct every mistake and missed opportunity be worth giving up the world you know and the life you have built? In Fifty in Reverse, 15-year-old Peter Wyatt does just that.

In the spring of 1970, Harvard psychologist Terry Canyon is introduced to Peter, a quiet kid from a wealthy family who has been suspended from ninth grade for stripping off his clothes in algebra class. When Terry asks Peter why he did it, the boy explains that he was trying to “shock myself awake”. It turns out that Peter believes he is a 65-year-old man who went to sleep in his home in New York in the year 2020 and woke up in his childhood bedroom 50 years earlier.

Hilariously depicting Peter’s attempts to fit in as a 15-year-old in 1970 and to cope with the tedium, foolishness, and sexual temptations of high school as he tries to retain the sense of himself as a 65-year-old man, Fifty in Reverse is a thought-provoking and enlightening novel about second chances and appreciating where you are in life.

What listeners say about Fifty in Reverse

Devoured this in one sitting. It's 4:44am and just finished listening to Fifty in Reverse by Bill Flanagan. picked this up from audibles recommendation. it sounded a lot like Replay by Ken Grimwood. I've always wished there was a sequel to Replay, and this might be the closest thing, if not a spiritual successor. the premise is the same, or close, in that our protagonist, one minute a 65 year old man, wakes up as his 15 year old version of himself , with all his memories in tact! if you've ever thought about what it would be like to go back to ones youth , but to know what you know now, perhaps be able to relive , redo or repair parts of your past. or just take knowledge of future events and use them to your advantage. at first he plays along, thinking it's a vivid dream, but after a couple of days begins to miss his wife and kids. and to shock himself awake, he takes his clothes off in front off his biology class. classic nightmare scenario. needless to say this doesn't have the desire effect but it does saddle him with seeing a psychiatrist 3 days a week. ultimately this novel is about missed chances , people and their lives, family secrets and coming to terms with seeing the youngest child go to college and becoming empty nesters. how do choices one makes in their formative years effect the rest of ones life? I really liked Fifty in Reverse and anyone over 50 who has thought about reliving memories or the road not traveled will also probably like it. the narration was crisp and delivered at exactly the right pace and timbre to affect the thoughtfulness the text is going for. 4 stars.

Hilarious performance! Really loved this and I laughed out loud listening to it many times. As far as the story goes, it’s wise, irreverent and surprising, and the first book in 2020 to make me laugh and then suddenly cry. Sweet and sentimental. Exactly what I needed right now.

Love a time loop but this didn't quite get there

For anyone saying this is comparable to Replay, take a hike. The main character barely takes advantage of the time loop effect and is generally an annoying downer. The book held my attention but I expected it to go somewhere interesting with the time loop. It let me down on that front.

I wouldn't recommend this for fans of time loop books (like me).

Going to listen a second time!

A really impressive audiobook by both the author and the narrator. It is even better if you remember the 70s and 70s music. Don’t wait, download it and listen. I was glad I did.

All my life I have fantasized about having a "do over" knowing all know now from my experiences, failures and successes. Having been born in the 60's, this book along with the musical references brought back so many memories and resonated with me.

The storyline is interesting and funny. A different take on time-travel. Fast listen and worth the credit.

A brilliant trip into the Twilight Zone

This is a lovely, well-written journey back to the spring and summer of 1970, viewed from the lens of a character who believed he had travelled back in time from 2020 to be his 15 y.o. self. This could have been a novelty book with superficial whims, but instead, is a spectacular adventure made with intellect and insight. Mr. Flanagan has written a gem.

I enjoyed this book. The story held my interest and was different from other time travel stories I have read. I appreciate the story was wrapped up in one book and not made into a series. Narration was enjoyable. I look forward to checking out other stories by this author.

This was a great novel. My only complaint is that I wish it were longer. This was a page turner (or page listener ) and I couldn’t wait to see how it unfolded. Will there be a number 2? Hope so!

If you have ever said "I wish I knew then what I know now" this is the book for you.. This is a wonderful story for anyone who thinks they might want to revisit their youth.

If you love Replay you should enjoy this

Great quick read. Keeps you listening and gives you that “life redo” content you crave. The narration is on point as well.