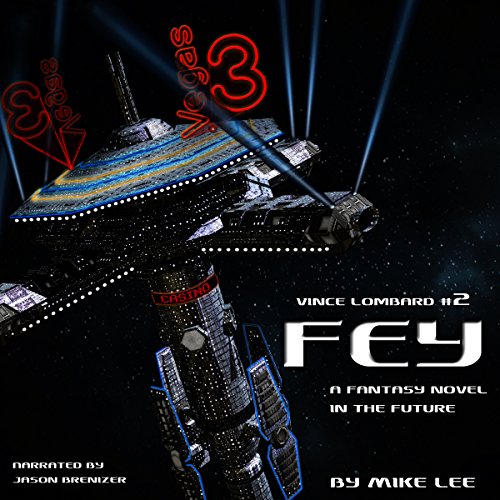 By: Mike Lee
Narrated by: Jason Brenizer
Try for £0.00

Fey: 1. clairvoyant; able to see into the future 2. to do with or related to fairies 3. fated to die, or having a forboding of death

Major Vince Lombard, Galactic Marine Corps (Ret.) is a professional gambler, slowly working his way back to Earth, one gambling station at a time, when he finds himself at the center of brewing storm. Someone has taken an interest in an old Earth legend, but for what purpose, no one seems to know, exactly.

The fate of the Fey has always been tied to the fate of humanity, but they have been content to stay in the background for ages, without worry that humankind is destined to continue on into the foreseeable future. Humanity has forgotten their very existence, as well as their role in the destiny of both races.

But now, after the better part of two millennia, one of the Fey pops up again, and in the most unlikely place: Many millions of miles away from Old Earth, on a space station that serves as a gambling casino.

A decorated war hero, Vince finds himself at the center of a brewing storm, as humans and aliens alike begin to see the potential uses a fairy can be put to. It's not just that everybody wants one. Everybody wants this one, and it won't be easy to find a path through the problems ahead, keeping his new Fey friend out of the hands of the government, and the aliens, alike. But an old veteran like Vince has a few tricks up his sleeve, still. Could that be why the fairy came to him?

Fairies are capable of things that humans have no explanation for. But they can't do everything, and sometimes, even a fairy needs a hand. Who better than a Galactic Marine to help, when some good old human ingenuity is called for? Maybe Vince has found a friend for life in his Fey companion. If he can save her life, that is.

Fey is a sometimes-whimsical, fun, and light fantasy/sci-fi adventure story.

What listeners say about Fey

Would you listen to Fey again? Why?

Absolutely. Following Book One I expected more 'war' adventures of the Space Marine Major. But no, we get the adventure of the poker player hinted at in Book One and an assortment of quirky belivable characters. I should mention that I haven't finished this book as yet.It reminded me of the first time I read Lord Of The Rings in that I never wanted the story to end such was the engaging nature of the story/plot. So it is with Fey.A mixture of Si-Fi and Fantasy that works.

What was one of the most memorable moments of Fey?

The unexpected development of the plot and of the main character.

Which character – as performed by Jason Brenizer – was your favourite?

Fey. I hope she remains in partnership with the Major.

Never fly 'Solo' if you can take 'Gandalf'.

May the Fey be with you!

I can't think of anyone I could NOT recommend this book. The action lover gets plenty with our hero starting out alone but immediately garnering 2 crushing opponents: the local police force and the Alliance Navy. As a professional gambler, he has his first game at a new casino blown up but luckily he escapes with the help of a real cocktail waitress who all thought was a hologram, so there's the romance and adventure crowd! And the who-dun-it's have a slam dunk while trying to analyze friend or foe, and in the big picture, who is the good guys? But it is not a rote grind 'em out in 6 weeks either. The writing is so good you're soon lost and keeping an eye on the bedtime clock and the performance of Jason Brenmizer melds it all with an even flow that paints the listener a picture of future reality the reader adapts to readily. I'm sure somewhere there will be a completely clinical review that will refute this but believe me, this is a win-win listen.

" What? You were hoping fairies are real, Higgins?

Would you listen to Fey again? Why?

Yes I would, it's a light entertaining story. Part Sci-Fi, part fantasy. Space stations, G marines, aliens and yes a Fairy. Tiny little Tinkerbell old world Fairy. Both the government and the Aliens want Fey ( the fairy's chosen name) And Vince ret. Galactic marine major is now her protector. Sort of an us against the galaxy thing.

Very imaginative with endearing, engaging characters. with a very comfortable old school Sci-ii feel to I. While I enjoyed Vince and Blondie but Fey stole the show and with only a single spoken line.

What does Jason Brenizer bring to the story that you wouldn’t experience if you just read the book?

Having read/ listened to Starfire and Fey he is perfect in the role of Vince Lombard. while still being able to do justice to the female characters.

Fey, Fairies in outer space. Fey takes on the lost boys of the galactic core

This is a wonderful set of stories Mike Lee has captured a unique segment of contemporary Sci-Fi. Should be very interesting to hear Horkers Law. While Dr Zim's elixir was a nice take on Zombies, Horker's Law, Starfire and Fey resonate more to me. Mr Lee has a deft touch with a character.

SiFi & Fantasy all in one?

At first I did not think it could be done, not sure it should be tried. Mr. Lee pulled it off with imagination and skill. I loved the book. Something totally unique and different. I went on line to get the next book in the series, alas no 3rd book. Very unhappy....Please Mr. Lee no vacations till its done! Also really enjoyed Jason Brenizer, in a way he reminded me of Luke Daniels.

I had to wait way to long between Starfire and Fey showing up on Audible. Please Mr. Lee, don't take to long with the next installment of this intriguing tale. Please make it longer and please continue to use Jason Brenizer as narrator. Demanding? Yes but, your story is just that good, and not finished yet. Nuff said.

Please when you going to finish this?

The Few, The Proud, The Fey?

What made the experience of listening to Fey the most enjoyable?

The story is told in the first person from the point-of-view of a ex-marine turned semi-professional poker player. This gives a strong connection with the narrator and how he is transformed by crossing paths with a mischievous sprite. The narration is spot on.

It was somewhat of a shock that this is a follow-up to a more traditional SciFi book, but it's not like the author didn't advertise that upfront. That being said, this isn't really much of a fantasy book or much of a SciFi book although there are elements of both. At it's heart, its a story of a character trapped in the middle while at least two factions collide.

If there is a weakness to the story, it's that after it was over, it's hard to say that much really happened. However, it's also true to say that you enjoy every minute and don't want it to end.

What was one of the most memorable moments of Fey?

The characterizations in the book are strong and there are some nice moments of conflict where strong wills clash.

This is book two in every aspect to it’s prequel “Star Fire”, which honestly seems like it should be and is book one. Again the plot line is spot on. As are the characters portrayed, they of course grow and evolve as the story continues on.
Jason Brenizer is one of the best narrators I have come across his range is so good. Simply put he sucks you into the story, making it a hard task to stop the or put down the Audible book.
This is a must read and listen to book well series really.

wow should i tell you?
nope. just think old inner earth on a space station casino.

I actually liked the prequel better, though this was an enjoyable enough story. I feel that the blending of Scf Fi and fantasy in the story was not particularly elegant.