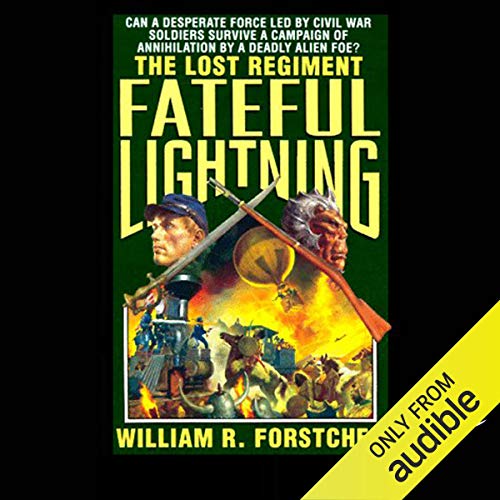 Can a desperate force led by Civil War soldiers survive a campaign of annihilation by a deadly alien foe?

Lost in another world and time, a regiment of Union soldiers find themselves part of a tactical retreat from the onslaught of the mysterious Merki hordes, reenacting the classic Russian retreats from the French and Germans.

What listeners say about Fateful Lightning

What if.......American civil war technology met medieval aliens? This book is a fantastic war story but also does not ignore the logistics and human side of conflict which to my mind makes it all the stronger. Add in the technological developments that were available at the time (mid 1860s) and exploit them fully and you get an amazing story. Read the whole series - they're brilliant!

it a good book

hi it a vgood book i love it the all :P

Will they ever have peace??

What did you love best about Fateful Lightning?

What does Patrick Lawlor bring to the story that you wouldn’t experience if you just read the book?

With this fourth addition to the series we finally bring the war with the Merki to a close. As a finale to the conflict, it works pretty well. After giving their all, the humans finally manage to turn the tide. If you've come this far, you'll want to stick it out.

Lost Regiment was the first, still the best

I stumbled upon these books in the 90s. I have to say they are incredibly well written. not a huge fan of the reader although he did well with the voices and material.

Every book in the series is amazing

Seriously the best series I have read and this was not an exception. I only wish the author wrote more of them.

He does a wonderful job bringing these characters to life. I’m so glad that he is the narrator for the series.

the narrator does a really good with this book. really enjoyed this book. would listen again

takes you to a world that picks you up and sweeps you away.. excellent read

It's a great continuation of the previous books and I'm looking forward to the others.