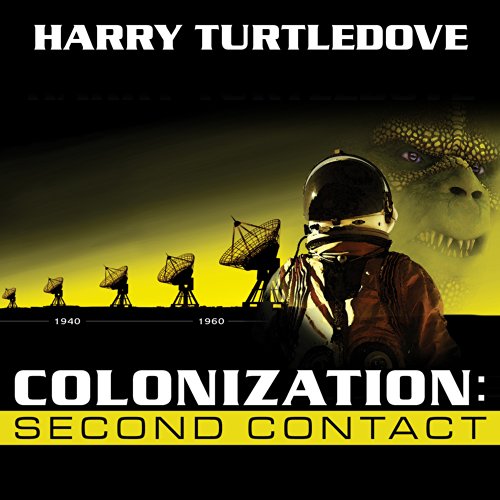 In the extraordinary World War tetralogy, set against the backdrop of World War II, Harry Turtledove, whom Publishers Weekly has called the "Hugo-winning master of alternate SF," wove an explosive saga of world powers locked in conflict against an enemy from the stars. Now he expands his magnificent epic into the volatile 1960s, when the space race is in its infancy and humanity must face its greatest challenge: alien colonization of planet Earth.

Yet even in the shadow of this inexorable foe, the United States, the Soviet Union, and Nazi Germany are unable to relinquish their hostilities and unite against a massive new wave of extraterrestrials. For all the countries of the world, this is the greatest threat of all. This time, the terrible price of defeat will be the conquest of our world and perhaps the extinction of the human race itself.

“[Turtledove] develops an exciting, often surprising, story that will not only delight his fans but will probably send newcomers back to the Worldwar saga to fill in the backstory.” ( Publishers Weekly, Starred Review)

Just like an invention by The Race this book is not heart stoppingly fast, even paced and methodical with the odd burst of speed Mr Turtledove is so precise and accurate with his writing you find this orderly pace interesting enough as to be enjoyable. He is a genius at building up tension in the reader of his tale slowly but surely. He's equally as good at creating fictional characters personalities to be realistic enough to interact smoothly with known historical figures whom you'd believe Harry had met in person. I loved this book it follows on brilliantly from the original series that I read years ago. Patrick Lawlors narration has you picturing yourself witnessing events and believing that's how the Lizards would sound. I can't wait to download the next in the series. I will be hearing a lot more of Mr Turtledove in the near future.

watch out for the twists and turns, the narrator plays the parts so well. go for it

Don't let the ratings fool you!

A 4 star book is nothing to be snuffed at, if I could have given it 4.5 I would have, but I felt 5 stars would be a step to far. I know this is part of what makes Turtledove a great writer but I enjoyed the progression of the old characters as well as the introduction of the new. He doesn't get stuck in tropes of how the characters from the Worldwar series have moved on with their lives. A slightly slow starter of a book considering how exited I was to see those old characters who are now 20 years older. But good things come to those who wait. It's downfall is the narrator. He actually does have a terrific voice, he can use tone, intonation and inflection go give great depth to the storytelling. But his accents for different nationalities and the aliens are not of the calibre this story deserves. He does improve as the story goes on but it's still not a patch on Todd McLaren. A criticism I have heard regarding this and the previous novels is the extended used of sexual content. It can get uncomfortable at times but I think that makes you sympathise with the character more at the end. I am more familiar with sexual content in movies and tv, sometimes some of those moments felt that they were there for the sensationalism and didn't add to the story. I feel they do add and more challenge you as a reader. Inspired writing.

First of all: the bad: Todd McLarren who narrated the World War books (which give the story before the Colonization series) is so good at it that Patrick Lawlor seems lackluster. Patrick Lawlor cant/doesnt do as many different voices and accents so at first it was sometimes (not often) difficult to follow which character is actually talking Now: the good: It was written by Harry Turtledove and that says all you need to know.

Having already read this the entire worldwar and colonization series some years back, I have really enjoyed listening to them again in audiobook form up to this point. The narrator of the worldwar tetralogy, Todd McLaren, was an excellent narrator who really brought the books to life. I was therefore bitterly disappointed when I was met with the lackluster narrating of Patrick Lawlor.
On the one hand I had gotten used to Todd McLaren, but sometimes narrators change and if they are good you can get used to them. This was certainly not the case here. Not only was the pronunciation different in many cases, but the narrator simply does not have the skill Todd McLaren possesses in speaking different dialects and making characters feel individual. More annoying still however is the way it feels as if he is forcing the words out, too slowly and too weighted. There is little dynamic and this is at times quite off-putting. It's as if he is trying to make everything sound important and dramatic when it rarely needs to be. I can with ease say I will avoid any books narrated by Patrick Lawlor in the future.

The story is still as interesting as I remember it, but with the narrator ruining much of the experience it technically doesn't even deserve 3 stars. Only my personal love of the book saves it from the left half of the scale.

My advice; read it instead.

I was so excited

I think I would recommend this only because you'll want to continue thru the story. I was so looking forward to a greater amount of new content. I have to say that I was disappointed by the lack of any "moving along". I felt just about like we left off about where we wound up at the end of the first series of books. I didn't hate it. I just felt a little cheated. I also didn't like the narration nearly as well as Todd McLaren's. When you pick up where another narrator leaves off you really ought to work on the pronunciations of the names of major characters. For instance if you were familiar with a lizard named Strayhaw you may need a couple of chapters to figure out that Strawhaw is the same lizard. Also the hissing speak the narrator added was less than necessary. I'll be continuing on with the series because 1. I'm dying of curiosity and 2. I've already purchased the rest of the books. Ha. I sure hope Harry doesn't let me down. He had all my confidence going in.

If you’ve listened to books by Harry Turtledove before, how does this one compare?

Usually the story get's told a little more completely than in this particular novel.

Who would you have cast as narrator instead of Patrick Lawlor?

Decent overall story, but the narrator makes it unbearable.

I’ve read the print version of the book before and am a big Turtledove fan, but sadly the reader does such a bad job that I couldn’t finish the book.

I loved the World War series, I was eager to finish every book. And when it came time for the Colonization series I was even more excited to hop right into it. I really wish Todd McLaren narrated this series as well because Patrick Lawlor was so bad. I'm sorry but its hard to enjoy a great book when the narrator makes me cringe every time I hear him. Butchered names, words, accents, hell even voice cracks from time to time. It makes me feel like I'm listening to a teenager's bad fanfiction. Like I said; Great Book, Bad Narration

The story was great, but they should have been more consistent with the narrating. I didn't like his voices.

i listened to all the other worldwar series here on audible and starting to listen to the new narrator immediatly made me turn it off. terrible

Great sequel to Worldwar but why did they have to change the narrator. Todd McLaren has a great range to his voice and brought to life the the characters from the various cultures, and the Race, quite well. Patrick Lawlor, on the other hand, makes it sound like Casey Kasem is narrating on American Top 40. Not able to engage the characters as well.

was good but actor needed to listen to world war.

i loved the book and the series before but i wished they had kept the actor from world war series or had this actor listin to how names were pronounced in world war by the old actor it kept takeing me out of the universe when i had to mentality reprounounce a few names like a few lizards and two of the humans the polish one and the old calvary officer.

The narrator ruins it

The story isn’t perfect and even doesn’t make sense in a few instances but the writing is still good. The narrator however is bad. He also pronounces everything different from the previous books narrator and its very distracting and frustrating.

While no one can deny Patrick Lawlor does not live up to the bar Todd McLaren set, he does a really solid job and is far better than some performers I’ve listened to. The issue I think many people have is that we’ve been spoiled by Todd’s ridiculous acting skills that when faced with a still solid performance we feel we might have been cheated. As far as story goes, it’s classic Turtledove and any self-respecting sci fi fan will enjoy. Though I do recommend you begin with the Worldwar saga first