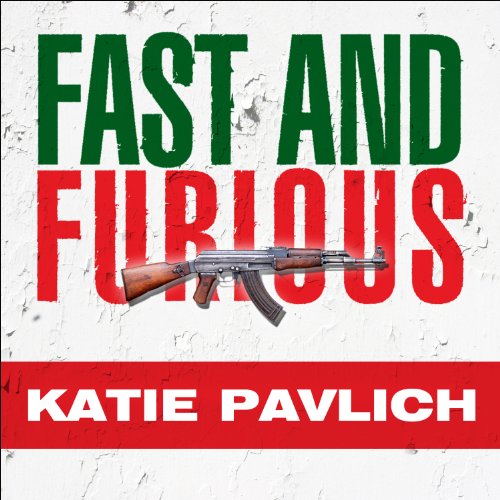 Two hundred and rising. That's the death tally for the Obama administration's "Operation Fast & Furious." The program was supposedly designed to "win the drug war" by deliberately walking more than two thousand guns across the border to Mexico. But instead of catching drug lords, Fast & Furious armed the very kingpins it was supposed to trap.

Despite the protests of gun store owners and ATF whistle-blowers, federal agents deliberately violated federal law-and common sense-and wound up placing American weapons into the hands of Mexico's most violent criminals. And when the guns started showing up at crime scenes-including the murder scene of a U.S. border patrol agent-the cover-up began. So reveals Townhall editor Katie Pavlich in her news-breaking exposé Fast and Furious: Barack Obama's Bloodiest Scandal.

While the White House has claimed ignorance of the program, Pavlich debunks their lies, denials and excuses by demonstrating incontestable proof that President Obama and Attorney General Holder did willfully and knowingly sanction the program in order to advance their anti-second amendment agenda.

A horrifying look at one of the bloodiest scandals in the history of the American presidency, Fast and Furious is this season's sensational, must-listen book that will rock America-and the Obama administration-to its core.

What listeners say about Fast and Furious

This is a very well researched book on a totally underreported and excused scandal that deserves a lot more attention.

The 2nd biggest scandle since Watergate

Katie Pavlich has compiled a factual account of what we know so far about the Obama administration's program to arm the Mexican drug cartels in order to blame the resulting carnage on 'rogue' gun dealers with the ultimate goal of destroying the second amendment. It is clear from her research why Eric Holder refuses to cooperate with Congress in their efforts to find out who was responsible--it clearly goes AT LEAST as high as Holder himself.

Easy to listen to--even if the subject makes you want to tear your hair out.

It's not really news, but the saddest thing is that the only people being punished are the 'whistle blowers', while the political hacks they worked for have been promoted and protected. That, and the twisted logic that would make liberals actually believe 1) that such a hair-brained scheme would succeed in negating the second amendment and 2) the obvious racism of the liberal mind that Mexican's being slaughtered by guns provided by the Obama regime apparently are not an ethical or moral factor worthy of consideration. Oh, I'm sorry, I mentioned morals and ethics in the same sentence with liberals--my bad!

Oh yeah, the biggest scandal since Watergate is the treasonous disclosure of state secrets by the White House to make Obama look like a "tough guy", regardless of what it does to little people like the Pakistani doctor or the reputation of the United States as a worthy partner in sensitive intelligence operations. Now that will be a REALLY interesting book! Get going Katie!

Yes,it is very informative.after listening i did my own research and found it to be 100% acurate.

Excellent portrayal of Fast and Furious!

Would you consider the audio edition of Fast and Furious to be better than the print version?

With this subject matter, I can see no difference in the impact the book would have. I read it for a factual portrayal of the definitely illegal practice by an agency of our country.

The whistleblowers! We need people to stand up and tell the truth in these autocratic times.

No - I look for authors and content - not permormers, although they make a huge difference in the enjoyment of audiobooks.

I have read other books, testimony, newspaper articles about Eric
Holder and Fast and Furious. Katie did an excellent job of detailing
The testimony and truth that tells the real story about the DOJ and ATF lies and coverups. As a private citizen and retired federal employee this event should concern and scare every citizen.

What an outstanding presentation if one of the most shameful scandals in US political history. Highly recommended. Great read.

Very well narrated but would have liked Katie to have done it as she speaks so well. Glad she wrote it.

Where does Fast and Furious rank among all the audiobooks you???ve listened to so far?

Fast and Furious is a no-nonsense, factual documentation of the circumstantial evidence proving that Obama and his key appointees are directly responsible for the deaths of Brian Terry and hundreds (so far) of Mexican citizens. Obama, Holder, Clinton and Napolitano should be tried for conspiracy, obstruction of justice and treason, among other crimes.

The most important person (still living) associated with this criminal operation designed to undermine the Bill of Rights is whistle blower and ATF Agent Vince Cefalu. Cefalu makes it painfully obvious that the whole Gun Walking scandal had nothing to do with law enforcement and everything to do with pushing an anti-Constitutional political agenda.

The most important person associated with this scandal no longer with us is Border Agent Brian Terry, who was murdered with guns that Obama and his appointees shoveled into drug cartel thugs' hands in their idiotic attempt to sway the American public's opinion against the Second Amendment. May God bless Terry and give his family strength to cope with the betrayal they suffered by the government that should have protected their loved one rather than stabbing him in the back.

The most damning scene in the book is AG Holder trying to explain why he lied about when he first learned about this illegal operation. He should be fired immediately. That he has not been demonstrates that Obama fears he would retaliate and turn who his co-conspirator.

What???s the most interesting tidbit you???ve picked up from this book?

Having followed this scandal since it first broke there was not a whole lot that was new to me. The book does an excellent job of pulling all the facts together to demonstrate how badly our country is being betrayed, not only by the current president and his administration, but by the complicit media that has done such a poor job of reporting the story.

In essence, Fast and Furious is Obama's Iran-Contra and Watergate scandals rolled into one. If this conspiracy had been undertaken by a Republic president and administration, the media coverage would be non-stop. Demands for justice and prosecution would be heard daily. And yet, the media has been almost completely silent on this sad, disgusting betrayal of the American people.

Katie Pavlich should be recognized as an American patriot for attempting to shed light on these criminal acts and honored for being one of the few journalists willing to live up to her profession.

Second Amendment " We'll destroy it at all cost "

Katie Pavlich has capture in detail just how far the Obama administration was willing to go in their deception to blame law abiding gun shop owners for our government failure on the border.
As Rob Emanuel said “You never let a serious crisis go to waste”
The gun hating second amendment crown crossed a deadly line in their lust for change. Americans and hundreds of innocent Mexicans ended up murdered and the nightmare is far from over.
The facts in this book come from whistle blowers and recorded facts from the ongoing congressional hearings not conjecture. Any American or Mexican that reads this who is not writing our President or Mexico’s asking for Holders head should be ashamed.
A good read and lesson in American Politics.

If you think you know what happened in Fast and Furious and the extent they went to in order to cover it up... unless you have listened to or read this one, you don't. Get it today. You will come away definitely informed and possibly surprised.

The definitive guide to firearm policy as enacted under Obama. Worse than Watergate in every way.