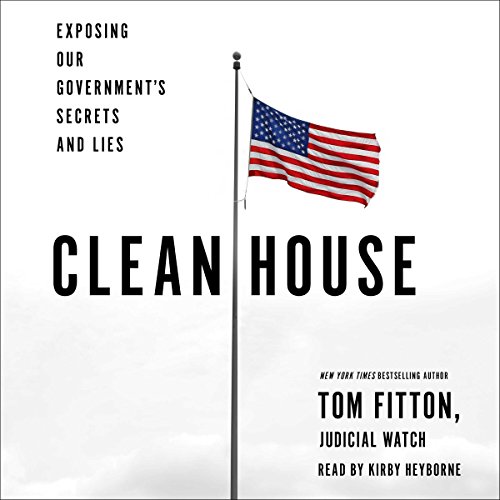 From the New York Times best-selling author of The Corruption Chronicles comes a devastating exposé of the scandals of Obama's second term. Judicial Watch President Tom Fitton reveals what the largest watchdog agency in America has uncovered in its battles against Obama's secrecy. Clean House takes us through incriminating documents from the attack in Benghazi, Hillary Clinton's secret emails, the IRS scandal, and the Obamacare swindle.

As the president of Judicial Watch, America's largest nonpartisan government watchdog, Tom Fitton has investigated the Clinton, Bush, and Obama administrations. Judicial Watch is the group that helped impeach Bill Clinton and took the Bush White House secrecy all the way up to the Supreme Court. Since the beginning of the Obama administration, this grassroots group has filed over 700 open-records demands and dozens of lawsuits, including a successful fight over the secret Obama White House visitor logs.

Americans are rightly worried they are losing their country. How did five congressional committees miss the smoking gun on Benghazi? How did Hillary Clinton keep a secret email server quiet for years? Does the IRS audit you because of your politics? Did the first American target of Obama's drone program work for the US government? How did Congress commit fraud to get Obamacare taxpayer subsidies?

In Clean House Tom Fitton answers these questions and provides shocking evidence of the corruption endemic to the Obama White House.

Most Important political book of its time

Finished the same day I bought it. i found myself in shock and disbelief. But it was written with loafs of supporting facts, memos, emails, quotes and data. No disputing. I feel it is potentially the most important political read of its time.

this is a must-read before election day

it does not matter if you are a liberal or a conservative. This is not about right-wing vs. left-wing this is about the American people versus our government. This book very clearly gives examples of how our government does not have our best interests in mind and is taking advantage of the American people's money and ignorance. Please read this book and pass it on to your friends I could not believe how disgusted I was by the time I was finished with this book. This is only motivated me even more to vote trump

i cant beleave we let obama and all the others get this far.....we are so stupid

A well crafted review of the last 8 years of government oversight and policy that has led America down a dark path and an uncertain future.

Why did someone like Trump win the election? Start here.

For those wondering how someone like Donald Trump just won the election, this is a good place to start to learn why. I think many people became sick of the previous administration's lax foreign policy, open borders, disregard for law, lack of transparency, and crony capitalism. This book touches on all of that. The vast majority of American people saw the swamp that is DC and felt the best option for president was a Washington outsider businessman who would take no guff and drain it. (Though I fully expect Judicial Watch to keep an eye on his administration too.)

This book exposes how politicians run their own agendas, and then cover up and stonewall when they are uncovered. A deep sense of morality seems to be altogether missing from the political maneuvering. A timely listen coming into the fresh presidential term in 2017.

This is a great audio book and everyone should read it. Our freedom is at stake!

Corruption outlined here is beyond belief

Everyone that's concerned about government corruption should read this book! For the safety and security of our nation.May God have mercy on us.

Good Narrator - will take you through the details of Fast and Furious, Lapse Border Security, and Immigration Corruption

It will make you head hurt and probably your heart, too...that America has been betrayed and vulnerable for 8 years

WOW, what a great book. It was hard to listen to it because of how corrupt our government is under Obama. I feel like we are screwed now and how do we ever get back to where we once were or where we want to be in the future. I am glad I read it because now I am more informed but depressed as well. Thank you Judicial Watch for your oversight and persistence in fighting for Americans. I can't think you enough. Every American should read this book.