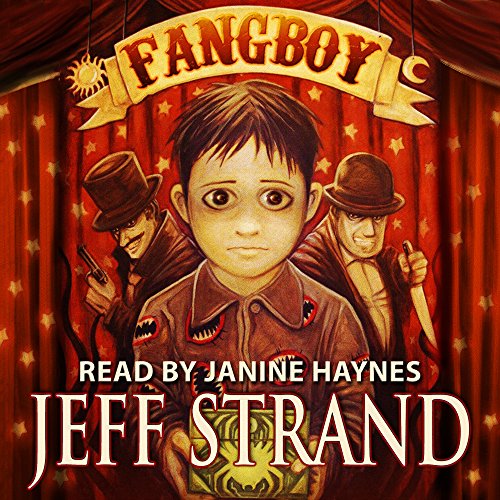 Nathan Pepper seemed like an ordinary baby - except for a mouth full of scary sharp teeth. Because his life began with his grandmother strongly recommending that he be destroyed as soon as possible, it's safe to say that Nathan was not destined for a typical existence.

He hated the nickname "Fangboy," but nobody could deny that he was the most frightening little boy in town. And he would have adventures of every sort. Tragic adventures, like what happened to his parents. Dangerous adventures, like his encounter with the sinister Professor Mongrel. Thrilling adventures, like the part where he's on an out-of-control horse and he can't make it stop running and you think "Well, he should just jump off," but he can't because it's going too fast and he could break a leg. And, yes, one particularly gruesome adventure, though it is not described in great detail.

Will things end happily for Nathan? Will he bite somebody? Gather your family and your most deranged friends, make some chocolate chip cookies, and share the twisted comedy treat of Fangboy, a bizarre yet heartwarming yet rather tasteless saga that - all ego aside - will define a generation.

A very cute and funny tale..

A very cute and funny tail. Appropriate for children but entertaining for adults as well. I laughed out loud several times.

Jeff Strand has become one of my favorite authors, and I always look forward to another of his original, captivating stories. This is the first time I've struggled to finsh one. It almost felt like someone else wrote it. The story itself is fragmented, and while the premise is interesting, the whole thing just fell flat.