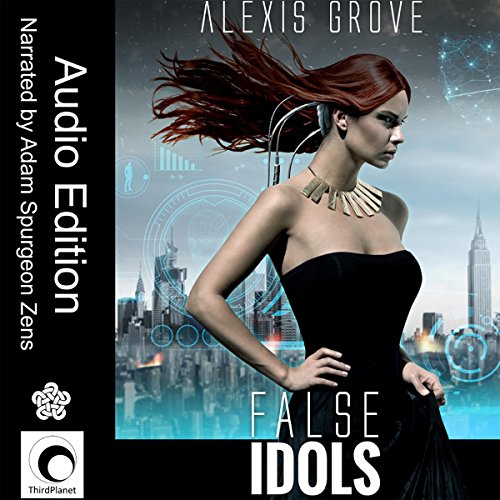 In the year 2047, neural implants have given a small slice of the population superhuman abilities. Are these Aeons brilliant humanitarians dedicated to saving civilization, or venal psychopaths bent on its destruction?

When Sarah Fenton is recruited out of her orphanage into a mysterious government program, this question becomes her mission. Answering it incorrectly could spell the end of the human race.

Her only path to the truth lies in beguiling an Aeon named Nick Lal, the reclusive scion of one of the planet's wealthiest families. Even as Sarah realizes she's falling in love with him, she begins to fear that he is not as innocent as he appears.

As famine and religious strife threaten to push the nation into a three-way civil war, Sarah's time runs short. Will she be wily enough to choose correctly and save the world?

What listeners say about False Idols

What I 'Should Have' Learned from Sci Fi

False Idols is a good book set in the not too distant future It deals with several uncomfortable themes: a possible downside of our quickly developing technology, the human desire for the ultimate improvements to the human race in mind & body, the ease in which a small group of people can have a great influence over the world, and potentially cause a police state to be put into effect due to the actions of that small group of people.

Sadly while the narrator, Adam Zens, does grow on you, his narration is too fast and the serious lack of punctuation made the story hard to follow at times, though some of this could be a result of the editors. I started & stopped this book a few times before biting the bullet letting it play all the way through. In addition to slowing the pace and more use of punctuation, I would like to see him be a little more consistent with the distinct voices of the lead characters.

False Idols is a Science fiction that could become reality as an elite few who, thanks to pre-existing vast wealth, can afford the inordinately expensive Mindwave technology that makes them superior to their fellow humans. However, once they become Aeons, they proudly proclaim themselves as False Idols.

I'm sorry to say I did not complete this book, in fact I didn't make it ten minutes before I had to shut it off. I'm not sure how the author allowed this to be published in this form. The book literally sounds like a machine is reading it, the intonation in all wrong the words are not pronounced correctly, and there are no pauses in the reading. Usually I will try to out last an annoying narrator, but no way could I listen to this "person" for ten hours.

I gave the story four stars because I didn't want to ding the author for the poor narration, but I don't actually know if the story is good.

note: "This audiobook was provided by the author, narrator, or publisher at no cost in exchange for an unbiased review courtesy of Audiobook Blast."

Where does False Idols rank among all the audiobooks you’ve listened to so far?

It is very certainly one of the best stories I have listened to thus far. I will be reading/listening to all of Alexis Grove's other books, and I am already a fan of Adam Zens.

What other book might you compare False Idols to and why?

It is a little like "Star Wars" because it combines religious, philosophical, and technological themes with awesome edge of your seat action and a great story.

Have you listened to any of Adam Zens’s other performances before? How does this one compare?

Yes, I am a fan of Adam Zens. He has a great voice. This is his best book so far.

Is This The End of the World As We Know It?

This is a really good book. If you enjoy sci-fi, religious, philosophical, or action genres, you will love this book. It is family friendly and relatively clean.

What would have made False Idols better?

This is a good story with an intriguing plot, but the narration and editing have ruined it.

It sounded like the book was being read by a text to voice program, with lack of pauses for punctuation and mispronounced or oddly intonated words. I don't see how any editor or producer could have listened to this and thought, yes, that's what I want. If this is some experimental computer program it failed.

What made the experience of listening to False Idols the most enjoyable?

It was a fast paced, action filled, sci-fi story

What was one of the most memorable moments of False Idols?

The whole book was great

Which character – as performed by Adam Zens – was your favorite?