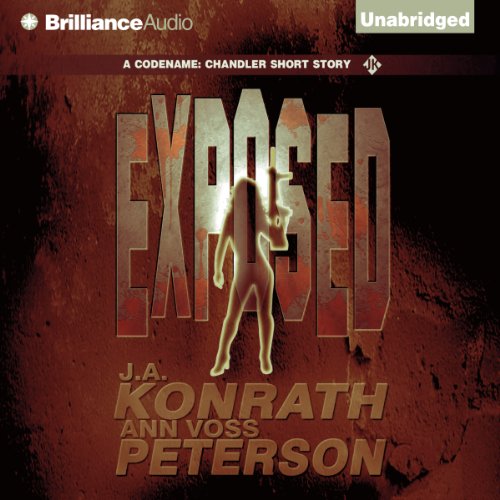 By: J. A. Konrath,Ann Voss Peterson
Narrated by: Angela Dawe

She's an elite spy, working for an agency so secret only three people know it exists. Trained by the best of the best, she has honed her body, her instincts, and her intellect to become the perfect weapon.

Before special operative Chandler was forced to FLEE, she executed the most difficult missions - and most dangerous people - for the government. So when she’s tasked with saving a VIP’s daughter from human traffickers, Chandler expects the operation to be by the numbers…until she uncovers a secret that will endanger the entire population of New York City, and possibly the world.

Death is in her blood.

Stretching credibility to the breaking point.

In the audiobook version the narrator's voice actually hurt my ears and gave me a headache. not just the horrible voice, but she she ignored full stops, stopped in the middle of sentences and spoke in a staccato rythym. Utter torture. I had to read the book to finish the story.
Main plot and action in the laboratory stretching credibility to the breaking point.

I loved the book which began with Julie. Please keep up the great work with this series.

YES! Back to another great story.

Okay so after the first book Hit was so dreadful, Exposed was great! Thank you for giving us Angela Dawe back along with another great story full of action. I really liked this book a lot.

Chandler is my new James bond. Way sexier way more action and such good stories. Can’t wait for the next one

bad guys around every corner

What did you love best about Exposed?

the action that never stops

What does Angela Dawe bring to the story that you wouldn’t experience if you just read the book?

she had a way of making you feel what the heroine of the book was going thru while in extreme danger.

Would you listen to Exposed again? Why?

NOT NECESSARILY. IT WAS SOMEWHAT PREDICTABLE.

What other book might you compare Exposed to and why?

THERE ARE MANY SIMILAR BOOKS BUT I CAN'T THINK OF ONE IN PARTICULAR.

When she wakes up and find everyone around her dead.

When she had to decide whether to kill the young girl.

Okay - would listen to others in the series

I did not like the narrator at first. However, over time, I did get used to her voice.

Story was pretty interesting -- I became more engaged over time.