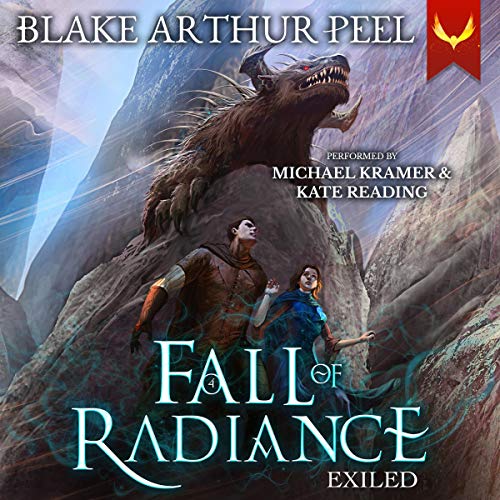 War has torn Tarsynium asunder. However, the true war lies just ahead...

After the defeat of the king’s army at Dunmar City, a letter arrives from the Conclave's High Magus seeking a truce. The Nightingales, in desperate need of friends, leave their mountain stronghold to forge a new alliance with rangers and mages, to unite themselves against the king. But when political intrigues lead our young heroes into a trap, they face a punishment reserved for only the vilest of criminals: Exile.

In order to survive the wastes beyond the Arc of Radiance, Owyn and Zara must rely on each other’s strengths. Together, they must somehow return to their homeland, to unite its warring factions and help change its uncertain fate.

They soon learn that the gravest threat lies not in the elements, but in the encroaching demon armies that are drawing ever closer to the kingdom...

Buy the fourth book in the Fall of Radiance series. Perfect for fans of Sabaa Tahir, Sarah J. Maas, and Brandon Sanderson.

What listeners say about Exiled

As easily enjoyable as the earlier books, but unfortunately spoiled by a random lecture on morality in the middle. It focussed on the terribles perils of drink and premarital sex, which stands out like a sore thumb in the middle of a fantasy novel, especially where the people concerned are clearly in love, have been living together for months, have gone through hell, are all the other has, and have been sleeping together for weeks.... then all of a sudden an odd lesson on morality. Now it's not the prudish morals that annoy me, it's the fact that it pulls you out of the story. It's a fantasy for a reason, a willing suspense of disbelief. This spoils all that, for a little while at least.

I would rather the author had either brushed over the topic, and left the characters alone until the morning as it were, or come up with a more fitting diversion to interrupt them.

Apart from that, as simple and enjoyable as usual.

And Still there is More!

The rot keeps getting thicker and, just when you thought King Aethelgar could not get any nastier, he surprises us all. Elias has been made Protector of the Nightingales, which does not go down well with all.

Owyn and Zara are exiled, but they are not finished yet.

Such a good fantasy; so glad I found it.

Probably the best book in the series so far

I enjoy how this series continues to go in directions where I do not originally think it will go. The author has done a good job on character building throughout the series, and especially at building the relationship between to two main characters. I always find it hard to review the books in this series without giving anything away. What I can say, is that as the series continues to build, the overall story improves.

All in all, it's still not one of the top fantasy series I have ever read, and not one I would see myself reading again in the future, but it is very enjoyable, and I continue to look forward to the next book.

As always, the narrators put on a great performance.

Leading up to something awesome...

Exiled, as I understand it, is the penultimate book in the series. It follows Owyn and Zara on their journeys outside the Arc of Radiance, as well as the political goings on inside the kingdom.

Overall, I really liked this title. It’s definitely setting up for a final showdown between the forces of good and evil.

Honestly, I can’t wait to read about the final battle. I want to see how everything wraps up.

Exiled is by far THE BEST of the Series!!!

This book starts off like all of the others, the main characters Owyn and Zara have just survived the massive battle with the army of the King Aethelgar at the Nightingales home, Dunmar City. Initially sent there under a banner of peace to try and bring the Nightingales into an alliance, they were betrayed by a slimy dishonourable excuse of a knight, who only came on the mission to learn the location of Dunmar City, so he could then runaway in the middle of the night, and bring back an army. However, they did not count on the honour of the Rangers, who saved the day.
At the start of Exiled, the Arch Magister offers to meet with the leaders of Dunmar city, to broker a peace deal, but this is nothing but more treachery from Aethelgar, and Owyn and Zara are captured, and, as the title of the book suggests, they are tried and sentenced to Exile.
This book has some unique differences to the other 3 books, for starters, for the first time in a series of this nature, we are really not sure if our 2 Heroes are actually going to live – for no one has ever returned alive from beyond the Arc of Radiance once exiled, for once you are beyond the protection of the barrier, there is no return.
As a result, we get to actually see what is beyond the Arc of Radiance as well, having heard so much about it, the scorched land, the land of Demons, etc, all the tales, but now the Author has dropped his two main characters into the beyond so that we can get a real understanding of what is beyond the Arc, and what awaits the people of Tarsynium if the Arc falls.
One of the other major differences in this book, is that throughout this series, we have only ever had the Points of View of Two Main Characters – Owyn and Zara. In this book we get three – the third being Elias Keen.
In book 3, we learnt a lot about this character, how he was once a Nightingale, (and held an Elite rank in the Nightingales to, one that seems to hold reverence even now, decades later), he left, and became a Ranger, and is now one of he most respected and honoured Rangers in the realm, until now.
But with the ability to actually hear what the character is thinking as the story unfolds, we get a whole new insight into the character like never before, and whilst you might think this could possibly ruin the character, taking away from the mystique of this exceptional character, you would be wrong, as it only adds to it.
Peel has been very clever with Keen’s character, not just opening him up and letting us peer into his head, but rather giving us glimpses of the incredible Ranger, Leader and Warrior he is, and just how unbelievably stunning his character actually his. Peel has done a masterful job with Keen, giving us just the right amount of insight into this Legend, but not too much so as to ruin the appeal.
Meanwhile, the other two are stuck in no mans land, and this is also a fascinating aspect of the story, getting to see what is on the other side. I am not going to give spoilers away, other than to say, Peel has outdone himself with some compelling and creative writing that is utterly captivating, and you will find yourself absolutely glued to the pages of this book.
As with the other books, we get to see deep into the souls of Owyn and Zara, as they are stripped bare in this new place, and it is extraordinary watching the characters develop in this fascinating place.
Peel has totally outdone himself with this book, it is easily the best of the entire series, for its gripping, intense, often brutal storyline. The character work is just outstanding, as with every character, we get to see such depth and detail of their inner workings. As for the world building – Peel has continued to create this masterful location, that originally started inside this shielded bubble, but he has now taken us outside the bubble, to what is on the other side, and his descriptive work, of the landscapes, the Demons, it is breathtaking. Peel is a true artist when it comes to creating and bringing to life these landscapes, so that as you read the story, you can totally immerse yourself into the story, it is just stunning. It would be brilliant to see a compendium of the Demons, he has done such a beautiful job of describing these fantastical creatures in such detail.
This is Fantasy at its absolute best, with Magic, Rangers, Intrigue, Politics, Deception and Treachery, True Friends and Love, and some of the best character writing and world building you are going to read – Don’t miss it, it is an absolute treat!!
The Narration is outstanding, done again by Michael Kramer and Kate Reading. It is clear and concise for an easy to understand listen, Kramer has a nice voice to listen to, and he does a great job with Owyn, capturing the young Ranger really well. In this episode, he does a particularly exceptional job with Elias Keen as well, really capturing the Ranger and his inner thoughts and bringing them to life. You really feel like you are listening to Owyn’s inner monologue when Kramer talks, and he conveys the emotional aspects of the character really well.
Kate Reading is just AMAZING!! She never ceases to surprise me at how incredible she is at bringing her characters to life, and giving them so much raw emotion in a performance. Again, you really feel like you are in Zara’s head, this is a really powerful performance. Overall – this is a must listen audiobook!!

Captivating, even breathtaking at times!

The story arc continues to grow. The pace of the story never stops. Very gripping. The action flows along like a river. My only concern in the book pertains to the Protector. I found that for someone who has spent his life at war, he became far too trusting. I understand his hope, but I felt he was too trusting too fast. Other than that I really loved the story and the way it continues the plot from Book #3 and pushes you right into the next book. I got to the end and realized I didn't have the next book waiting for me. I immediately logged on and purchased it. I couldn't wait to start it. I had to find out what happened next.