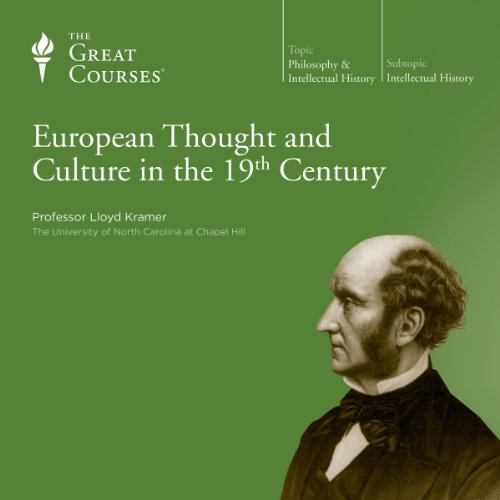 European Thought and Culture in the 19th Century

In the 19th century, Europe was the crucible for most of the ideas, institutions, and "isms" that now shape the life of our entire planet- nationalism, capitalism, democracy, socialism, feminism, and the list goes on and on. But where did these ideas come from? How did the particular conditions of Europe between the French Revolution and the First World War shape these thinkers' ideas, the thoughts of their critics, the progress of the debates that went on between them, and the wider hearing that all received?

Over the course of 24 sweeping lectures, Professor Kramer invites you to view intellectual history as a series of overlapping, interconnected dialogues, which will help you deepen your understanding of the ideas of influential 19th-century European intellectuals; reflect on the interactions between ideas and social experience; and think critically and creatively about how the ideas of 19th-century Europe's leading thinkers and writers still raise a host of cogent questions for our own time.

You will examine not only famous thinkers like Marx, Darwin, and Nietzsche, but a number of important, though less well-remembered, figures including the romantic author Germaine de Staël, the positivist Auguste Comte, the novelist and feminist George Sand, the political theorist Benjamin Constant, and many others-each placed in a context and linked both to other creative thinkers and the major issues of the time.

Beginning the legacy of the 18th-century Enlightenment and its connection to the French Revolution and ending with the philosophy of Nietzsche, this ambitious course is rich with great-and lasting-ideas.

Would you consider the audio edition of European Thought and Culture in the 19th Century to be better than the print version?

It is a lecture series - it is bound to be better than lecture notes isn't it?

Kierkegaard. His sense of humor, I think.

What aspect of Professor Lloyd Kramer’s performance might you have changed?

It's a slow start, if you stick with it though he becomes much more engaging throughout.

No. Too much to digest in one sitting I think.

Yes. This is an adept guide to a century and a half's worth of ideas. It is not the most exciting listen on Audible but if, like me, you have always struggled to place the very important philosophers of this period within a narrative and see how they interrelate then I would heartily recommend this. Well done Prof. Kramer.

Great narator and a great insight into the 19th Century culture. It is a great revise of my high school literature curriculum, but today, I am definitely more intune to it.

Loved it and learned a lot

I was eager to learn about the thoughts and most prominent people in the 19th century and professor Kramer did not disappoint. While it's understandable that he could not go into extreme detail of all the people mentioned, he did in fact ofer a spring board for me to continue exploring.

His delivery is unique and rather enjoyable. In fact, I enjoyed it so much that I also purchased his 20th century lectures as well.

Loved it so much I have purchased part two - European thought in the twentieth century :)

One of the best great courses I've listened to

Wonderful narration and fascinating topic presented in an engaging and unpretentious manner. Will listen to again!

The course brings the bottom line of the major ideas of the 19th century in clear and understandable way. It is a great introduction, but won't lead you deep into the ideas or texts.

Too little detail, too much repetition

Professor Kramer has an admirable sense of organization: He lets you know exactly where he's going with each lecture, and with a subject as sweeping as this he covers a lot of important themes. He doesn't go deep on any of them -- this course is on an undergraduate level. My main complaint is that he spends too much time setting the stage with general descriptions of each movement or period he's discussing (repeating them several times) before zeroing in on the personal figures who exemplify the qualities of that movement or period. He could have taken a cue from some of the novelists he discusses who knew that personal stories tell the big story. Instead, you get twenty minutes on the qualities of the romantic hero (which are pretty obvious) and two minutes on Lord Byron.