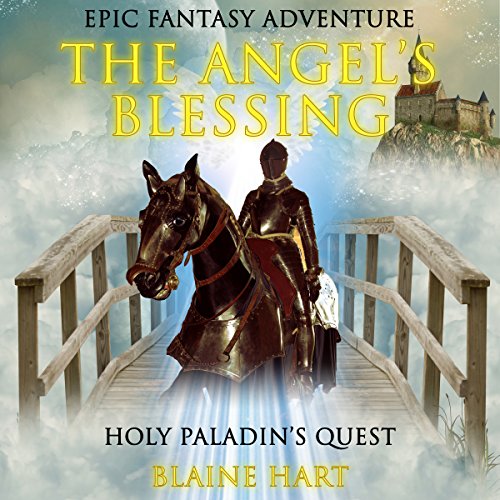 Visalth is coming and the Nine Realms are in turmoil

On the far western outposts of Queen Anastasias' Nine Realms, the evil bone dragon Visalth, in league with a mysterious army of brigands, is laying waste to the island strongholds. The undead horror is drawing near to the heart of the realm, leaving nothing but death and destruction in its wake.

But there is cunning beyond simple magic in these onslaughts. Right before any battle begins, the wizards, mages and clerics protecting the lands suddenly disappear. Without any magical aid or assistance, there are none who can stand before the attacks of the undead dragon.

So it was that on a quiet, barnacle-covered island in the midst of the Queen's dominion, the young and beautiful witch named Wendfala was abducted. Not long afterwards, on a quiet spring morning, the veteran holy paladin named Kell and his apprentice Longo received the strangest plea for help.

They had no choice but to heed the call from the imprisoned Sorceress. But before Kell and his faithful disciple can ever dare to stand before the dreaded Visalth, they must first show themselves worthy of The Angel's Blessing.

What listeners say about Epic Fantasy Adventure: The Angel's Blessing

This tells the story of the how the mighty paladin Kell and his apprentice Longo must work together to save their land from the evil bone dragon Visalth. It becomes clear very early on that this daunting mission is not going to be a simple one and soon they are sent on a wild and dangerous adventure that takes many strange turns. A nice and short fantasy tale, I look forward to part two.

An excellent adventure book that needs to be read! It is an interesting story which is exiting throughout Kell's journey in order to face the evil dragon Visalth. I would recommend this book to fantasy story lovers.

With wizards, mages, dragons, and a wizard named Visalth, among other magical things, this is a great adventure and fantasy book for anyone who is a fan of fantasy stories. You get a wonderful story that isn't hard to imagine as you listen to Jason Damrock's telling of it. I recommend it to teens and older who are fans of adventures stories and/or fantasy stories, especially those who like books like Harry Potter and ones involving knights and such, as well.

Epic Fantasy Adventure for All

This is an epic story of a brave paladin named Kell who embarks on a great journey. Through Kell and other characters, such as Longo, the story becomes an exciting adventure full of unpredictable events. Hart brings the characters through life with his knack for writing using vivid details and unexpected plot twist. This is the book for all epic fantasy adventure fans!

This had to be the worst book i have ever listened too. From start to finish it was terrible. I don't even think it can be considered a book.

This truly is an epic fantasy adventure story! The author goes in vivid detail making you feel like you are right there in the story. You quickly become involved in the adventure and wishing it wouldn't end. Can't wait for more in the series!

Interesting story, but to short. Needed to be longer to be worth the buy. Loved the Narrator though.

The Angel's Blessing: Engaging and Fantastic.

The Angel’s Blessing is an epic fantasy book with dragons and magic. Kell is one of the characters who spent his youngest years under the domination of brigands and quickly learned stealth and cunning as a way of life. Kell’s grandfather had a bountiful garden and in there, he saw crawlers and wigglers and flyer of all sorts. They lived in a small island of Dunsil and they were often visited by passing ships looking for a remedy to help a wounded or sick crew man. There are other characters such as Anna and Wendfala in the book. I just can’t wait for book two to come out. I have already recommended this book to my friends who love reading fantasy books. Be sure to grab your copy now and enjoy the thrilling adventurous story of Kell. Kudos Blaine.

True to its Title!!

This novel wasn't anything like I expected. It really is an epic adventure from start to finish- it's an artful balance between believable characters and the fantastical adventures they go on. From how it started out, I thought for sure that Kel was going to be my favorite, but by the end, I knew that growing with Longo throughout the story made him my favorite by far. The narrator truly gives it a mystical vibe- it's a big help with some of the names and the voices given make for an entertaining read. This book was a lot of fun- can't wait to read the next one!

This was another look into the fantasy world that the author has created, and it is indeed a deep one. He keeps a classic, high fantasy feel throughout, and does a great job bringing the listener in. A good narrator, along with a strong story, make this book a great one to catch. The characters are unique and interesting, and their interaction is one of the best parts of the whole book. I'm looking forward to listening to the next installment.

What made the experience of listening to Epic Fantasy Adventure: The Angel's Blessing the most enjoyable?

The crisp audio quality and inflection in the narrators voice.

Would you recommend Epic Fantasy Adventure: The Angel's Blessing to your friends? Why or why not?

Yes, the story is very well written with a nice narrative. The characters are made to be very believable and realistic.

The main character Visalth. He displays courage constantly throughout this story and is a very relate-able character. Following along with the old statement "we all make mistakes, but we learn from them" is very fitting for Visalth, perhaps that is why I enjoy him so much!

Very good fantasy book with lots of action and powerful imagery. The story feels so natural and develops in a manner that is very captivating.

Epic is an Understatement

What made the experience of listening to Epic Fantasy Adventure: The Angel's Blessing the most enjoyable?

The Angel’s Blessing is a book one does not put down. Once you immerse yourself in it you are held captive until the end, just like Wendfala. The author’s imagination carries you away into another realm, a realm of swords and sorcery, dragons and battles created within Blaine Hart’s vivid imagination. If you are a fan of Fantasy and Adventure this one is sure to please.

What was one of the most memorable moments of Epic Fantasy Adventure: The Angel's Blessing?

The author's descriptive language which brought the book alive for me.

What does Jason Damron bring to the story that you wouldn’t experience if you just read the book?

His enthusiasm is evident in his voice. He enjoyed the story and making it come alive.