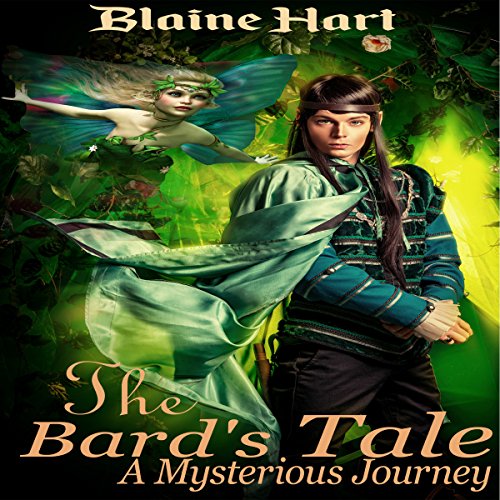 The Bard's Tale: A Mysterious Journey

By: Blaine Hart
Narrated by: Jason Damron
Try for £0.00

A terrible curse, a bard hunting the unknown. A powerful force has arisen, but it's face is still unknown

In the land of Theugua, where people still whisper of the ancient tales of old, a young bard practices with his famous master. In this ancient land, people called bards exist; warriors that can cast magic using their musical instruments. This land is full of legends, but they are nothing more than tales aimed to frighten the young, or entertain the old. But Ornsell, a simple man in everything but his soul, couldn't have known that those tales where coming back to life and that one of them was hunting him that very morning.

Ornsell's son, Vygarast, a half-elf and a bard-in-training, finds himself in the middle of unnatural events that spin his life out of control. Without knowing it, he finds himself entangled in a dangerous game of fate, one that will lead him into the greatest adventure of his life with thousands of lives on the line.

Theugua, once a land of peaceful humans and elves, is now threatened by what was meant to stay hidden, what was meant to slumber forever more deep in the shadows of space and time. The world is changing and nothing will ever be the same.

This is The Bard's Tale!

What listeners say about The Bard's Tale: A Mysterious Journey

Packed with well-rounded, interesting characters, The Bard's Tale is the perfect fantasy story. The plot is gripping and full of twists and turns and Hart's writing allows you to become fully immersed in the imaginative world he has created.
The narrator gives a great performance, allowing the listener to really become a part of the story. I would recommend this book to any fantasy lover. You won't be disappointed!

A short and sweet story that follows the adventures of young Vygarast, a bard in training who is forced to make an unexpected journey in order to save his father. There are many dangers and obstacles along the way that Vygarast must face which causes him to learn a lot about himself and the enchanted land he lives in. The peace of his homeland rests on Vygarast’s shoulders and so it is interesting seeing Vygarast develop as a character as he has to manifest a strength and qualities that initially seem beyond his abilities.

If you could sum up The Bard's Tale: A Mysterious Journey in three words, what would they be?

Have you listened to any of Jason Damron’s other performances? How does this one compare?

Jason Damron is a great narrator and he always make characters sounds so real – scary and exciting in this book.

This is an incredible and interesting tale I enjoyed listening to! The mysterious journey of Vygarast is full of adventures and obstacles. But knowing his father’s life depended on him he continues his journey and on his way discovers about his fate and who he really is.

"The Bard's Tale" - a journey from your dream!

“The Bard’s Tale” is a very engaging audiobook, that contains all elements of good fantasy story. We can admire magical medieval villages and towns, hear epic songs about famous knights, follow deep path in the forest and see magical and mythological creature like spiders, ogres, hydras and fairies. We can see fierce fights, tearful scenes, magical spells and famous legends. The most interesting character is The Owl Wizard who is greedy, a little creepy but has a great heart and power. I admire the scene when he is dancing and chanting in the middle of storm and thunders.
The narrator Jason Damron does a wonderful performance and create atmosphere of danger, fear and suspense, especially when he acting as different characters.
Hart is a very creative and passionate author that using vivid imagination, traditional elements of good fantasy story and very emotional language. His world is full of fantastic creatures, rich descriptions and action twists and turns. “The Bard’s Tale” is a great bedtime story for everybody, this kind of story that is nostalgic and makes you want to read them again and again. Highly recommended.

Even better than reading a fictional adventure is listening to it, because instead of concentrating on the words, you can just sit back, listen and relax, and it reminds me of the old times when stories were narrated in radio talk shows (which I'm not old enough to have experienced myself, but I recall seeing characters on classic TV shows enjoying them).

This particular story reminds me much of some of my favorite works, such as Lord of the Rings and the Harry Potter series. It has the same kind of adventure and suspense, and easy-to-like characters, as well. I think teens would also enjoy it, if they're willing to sit down for 1.5 hours and just listen.

"The Bard's Tale" Is a True Tale Fantasy

Where does The Bard's Tale: A Mysterious Journey rank among all the audiobooks you’ve listened to so far?

On scale of 1-10, with ten being the best, I would give "The Bard's Tale" a ten. I do not always read, or in this case listen, to fantasy books, but I really enjoyed it. It was like reading a tale of an angel on my shoulder.

What was one of the most memorable moments of The Bard's Tale: A Mysterious Journey?

The most most memorable part of the book for me was when "Vygarast" met the fairy "Azore Frostyhill." Once he freed her from the spider web, "she raised waved her hands about in a mysterious gesture. She glowed as bright as the sun for a brief second..." From that time she was an angel on his shoulder.

I really enjoyed when Jason Damron performed the role of "Lanarast" who was the son's master. He was teaching him what it was like to be and live as a "Bard."

The part of the book that really touched me was when "Vygarast" thought that "he wouldn't forgive himself if his father died...He felt the burdens of regret weighing on his shoulder. He was always out having fun with his friends. It was his fault that his father was cursed. He knew he could have helped him if he was out there with his father like he was supposed to be that day."

It is such a terrible feeling to think that you could have done something to stop your loved one from being hurt.

"Remember magic is a unity, a great flow of things that exist." (Lanarast)

A Tale Full of Suspense, Narrative, and Creativity

Would you consider the audio edition of The Bard's Tale: A Mysterious Journey to be better than the print version?

I believe it is the same as the print version of the book.

What other book might you compare The Bard's Tale: A Mysterious Journey to and why?

The description, suspense, and character description was a great reminder of Harry Potter at times. Both books have the ability to allow the reader to relate to this unknown world while staying engaged.

Vygarast was my favorite character because in many ways, he played a beautiful role in the curious son who strives for the truth.

Yes, this was a book that I wanted to listen all in one sitting.

Would you listen to The Bard's Tale: A Mysterious Journey again? Why?

Another Epic Fantasy Adventure joins the ranks as Blaine Hart pens The Bard’s Tale: A Mysterious Journey. Within the tale in this book we have witches, fairies, magical animals, wizards all found in a mystical realm from Hart’s imagination. In this wel-written story as we follow Vygarast, the hero as he battles creatures and monsters while seeking out a mysterious Owl Wizard who can save his father. As in any epic fantasy adventure the protagonist is helped and hindered by other characters in his journey. It is a journey that you want to complete in one sitting, putting down this book is nye on impossible.

Mystery at its finest right here!

This book has a great mystery plot and you don't know what will happen on the next page (or in this case, next sentence being told). It really was a thrilling book to try and figure out what was going to happen next. Get the book now and you won't be disappointed.

Where will this adventure go?

As a long time player of Dungeons and Dragons, this title really excited me. I always play a bard too, so I was really excited to pick up this book. The story is really engaging and I loved the characters. The narrator was also really nice to listen to. I liked the voices he used for the different characters. The whole listening experience was fun, and I listened to the whole story at once. I hope there will be more like this!

If you could sum up The Bard's Tale: A Mysterious Journey in three words, what would they be?

Vygarast, the young bard was my favorite character. He was a believable person and you wanted him to succeed in order to save his father. He seemed like the kind of person that was honorable and likable and you didn't want anything bad to happen to him.

Azore Frostyhill, the fairy Vygarest teams up with was my favorite performed by Jason Damron. The voice he gave the fairy was oddly almost female and the narrator did a great job ad differentiating this particular voice. It sounded like a fairy should.

The book kept my attention and wanting more. I wish it was a little bit longer and the characters would have more escapades on their journey. The action scenes, especially the fight with an ogre were especially well written. It kept you on the edge of your seat and the narrator did an excellent job at keeping my attention. The end of the book left you hanging in mid air wondering what is coming next, but that is what it is supposed to do so you want the next book and I do want it. I guess the author did his job well.