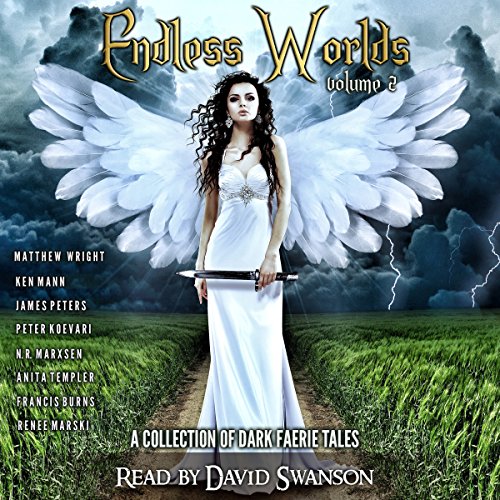 "The Last Citadel Of The Innocent" - Matthew Wright

While trying to rescue his parents from the clutches of city enforcers, the young soldier finds himself trapped in a war of ancient powers - and has to find the strength in himself to make a terrible choice.

Hunting a banished sorceress, a kingdom must find a way to revoke a curse that thrusts neighboring realms on a collision course for war.

A travelling bard tells the tale of a selfish, petulant prince who is granted his birthday wish, trapping him in the midst of a battle between a tyrannous beast and his new friends.

A talented young artist is given a quill with magical properties, and must face an evil tyrant who desperately wants to obtain his powers and use it to further enslave and dominate the lands.

King Edmund is finally gifted with a daughter and condemns his 12 sons to death. The brothers escape and discover their sister, Princess Raven, is their only hope in lifting a treacherous curse.

"The Blacksmith and The Beast" - Anita Templer

A young man in service to his king journeys to slay a dragon threatening a scorching destruction of his country.

A young woman must uncover the truth behind her nightmares in order to stop a witch's curse that threatens her village.

A princess joins a team destined to rid the world of its hidden evils while bound by magic that gives them the ability to do so at a price.

For fans of Fantasy a good collection.

Where does Endless Worlds Volume II rank among all the audiobooks you’ve listened to so far?

Better then average...... in any collection of stories some will be better written then others but their is a good variety for every taste in this genre.

Well the variety is what I enjoyed...... you have something for everyone who enjoys Fantasy.

Which character – as performed by David Swanson – was your favorite?

This is a varied mix of stories, many based on known fairytales. They aren't bad, some better than others. If you've heard the first one, this one is about the same. That's not good or bad and I did enjoy most of the stories.

Another great collection of varied stories. Great narrator too! I received a free review copy of this audiobook at my request and I have voluntarily left this review.

This was a fantastic collection of fantasy stories. Some even had a horror element, which was pretty cool. I thought the narration was quite good from David Swanson and really helped bring these short stories to life. Well worth the credit if you ask me.

I was given this free review copy audiobook at my request and have voluntarily left this review. Volume 2 contains dark fantasy short stories. I enjoyed this collection, but must note that some stories were far better than others. The good thing, they are all fairly short, so if you aren't really "feeling" one story, the next isn't too far away, I will re-listen to this book and see how I like it the second time(the true test). The narrator did a good job, and I enjoyed him better in this volume than in volume 1. If you are into dark fantasy, the Brothers Grimm, dark folk tales, etc., then you will like this mix of tales. If you are looking for laughs...look elsewhere. These are dark.

This is a collection of faerie tales with a dark twist to them. I enjoyed listening to them and once again David Swanson did an awesome job narrating! His ability to do so many different voices and inflict those voices with proper emotion is amazing! I would recommend this collection or the other (Vol 1) to my friends.

Unlike Volume 1 of these collections, Volume II does not contain any sci-fi or horror, but instead is a collection of fantasy stories. Mainly fairy tail based fantasy too. It contain 8 stories, all varied. Some are in the realm of high fantasy, but most are more Brothers Grimm folk fairly tale types.

I find fantasy stories much harder to be done well in short stories, as you have to set up the world and it's magic, while also telling the story. At least with sci-fi a lot of that doesn't need explanation.

The stories here are all enjoyable, some great while some are just okay. The story I enjoyed the most was "Gil And The Mystic Quill" by Peter Koevari (although I wasn't a fan of the coda/meta narrative), about a boy who is given a quill that allows him to draw, and create, anything he wants - provided it is not used for ill gain.

Narration by David Swanson is a step above his work in the first collection. So will the stories aren't as good, he is much better. He really bring the characters to life here - voices, emotions, action, accents etc. He performs the reading. He is clear, well paced and a joy to listen to. I look forward to hearing other works by him.