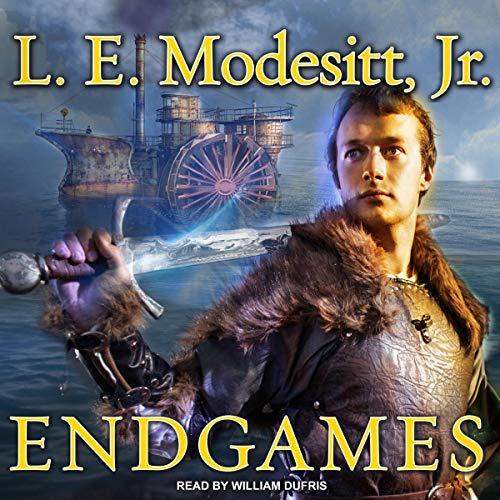 Endgames is the 12th novel in L. E. Modesitt, Jr.'s New York Times best-selling epic fantasy series the Imager Portfolio, and the third book in the story arc that began with Treachery's Tools and Assassin's Price.

Solidar is in chaos.

Charyn, the young and untested ruler of Solidar, has survived assassination, and he struggles to gain control of a realm in the grip of social upheaval, war, and rioting. Solidar cannot be allowed to slide into social and political turmoil that will leave the High Holders with their ancient power and privilege, and the common people with nothing.

But the stakes are even higher than he realizes.

What listeners say about Endgames

well rounded wrapping up of the series

Mostly about politics and not about imagers.

For the first 60 audible chapters, imager action existed once. I won't give spoliers more than that, but why do I care about letters and meetings and politics in a fantasy world where all of that can be explained over books that actually hold to the context of the series?

The story goes on, and on, and on, very slowly building towards the conclusion. Much of this might have been added to more action in the plot. Problem 2 is that the actual government administration is very thin, mostly not involved in the plot. Is this a country or a smallholding? Size of the first. The number of individuals running things the second. Yawn.

Starts slow with a Sad ending

I've read all of the Imigur and Recluse books and love anything L.E. Modesitt jr writes. The title before this was very slow to me and this one grabs you from the start. however, I found myself yelling at the author more then I have at any other book in the series so far. Lot's of repetition and having the main character not do things he would have done in a real life situation was frustrating.
***Spoilers Ahead! ***
Like ask the Imigers to image walls to demonstrate the power of the Caligum. Or to have multiple intrests with his possible love interests. Those are things I thought would happen. Instead you have the first and really only love intrest work out for him and no bad decisions on his part. Also in real life he would have relized growing up and even as soon as his father died that his brother would have been up to something.
Final Verdict
The thing that keeps this book as worth reading is the amazing world the auther creates and the joy and sadness he can make you feel towards characters. This will be a re read in the years to come and I am always happy to read his books again.

Best of all the books in the imager series.

I hadn’t thought about all the conflicting problems that a government must face The solutions given were basic but thoughtful.

possible Spoiler alert
Loved the Imager Series. I was not expecting quite that epilogue (in hindsight I guess I should have since it's the series end) and totally cried when I heard it.
Of course, because the series story line starts in the future and then goes back to the past mid series, I'm going to have to go back to the first books and re-read now that I have all this additional historical knowledge.

Finaly got to the end of this wonderful series. I thought I would be bothered by the shift in characters to a non imager but it was a good change and still an interesting story. While the ending was predictable becuase this is in the middle of the timeline the journey was well worth it.