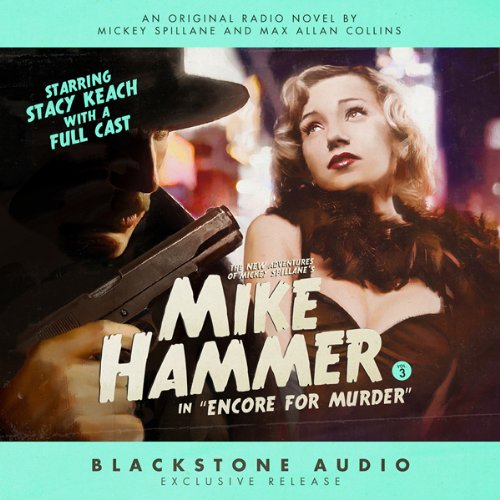 Mike Hammer, the toughest PI of all, draws a seemingly routine assignment—playing bodyguard to diva Rita Vance on the eve of her big Broadway comeback. But Rita is an old flame of Hammer’s, and when their romance is rekindled, the detective finds the actress facing death threats and himself the target of one hit man after another. When the actress disappears, the show must go on, which, with Mike Hammer, means swift, violent retaliation.

While the cops and feds go down a false trail, Hammer seeks to make a rescue before Rita’s curtain comes down. But first he must make sense of a mystery that takes him from a Soho art gallery to a mountain lodge, from Little Italy to a waterfront confrontation that is way, way off Broadway.

Working from the plot for an unwritten novel found in the files of the late Mickey Spillane, Max Allan Collins (Road to Perdition) has fashioned a compelling noir thriller that is vintage Mike Hammer all the way.

What listeners say about Encore for Murder

These full cast audios really bring the story to life ...almost as good as TV program with Stacy Keach.