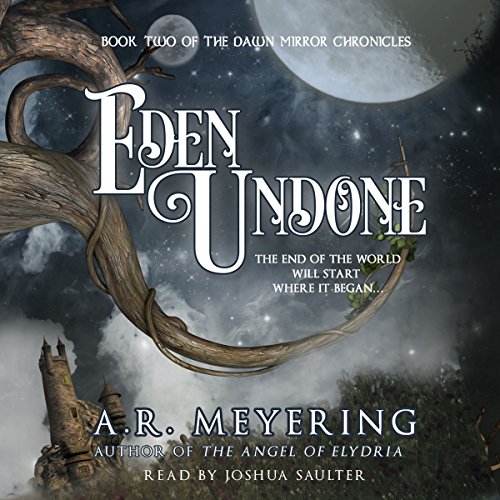 "When angels among demons keep, and Adrielle in Eden sleeps, 13 shards in chosen ten, will bring the fallen back again." The girl who conquered an Angel rises again. The Angel Nestor is gone, a mysterious stranger lurks in the shadows, and Penny Fairfax has tempted the Cardinal's ire. The adventures continue in the second volume of Dawn Mirror Chronicles, Eden Undone.

A war is brewing in Elydria. In the months since Penny thwarted the Angel Nestor's barbaric plans, turbulent times have been raging throughout Elydria. As Penny deals with the aftermath, a gruesome catastrophe rocks Iverton. The Cardinal threatens a political coup by the Order of Nestor if the Angel isn't soon found.

Follow Penny as she travels to the distant Nation of Faeries, searches for those who hold the pieces of a shattered Angel, and seeks the truth of her mysterious origin in the Garden of Eden itself. As the secrets of Penny's past unravel, she must look within herself to find the courage she never knew she had.

What listeners say about Eden Undone