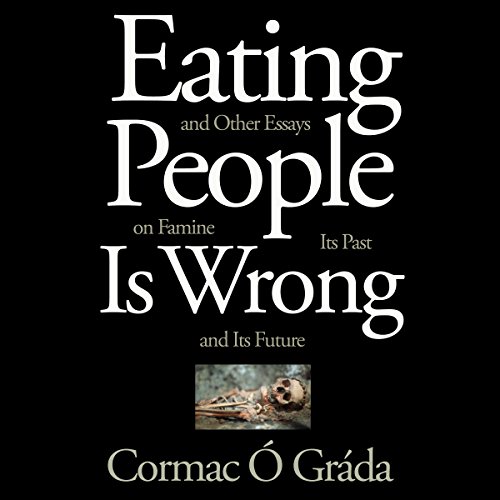 Eating People Is Wrong, and Other Essays on Famine, Its Past, and Its Future

Eating People Is Wrong, and Other Essays on Famine, Its Past, and Its Future

Famines are becoming smaller and rarer, but optimism about the possibility of a famine-free future must be tempered by the threat of global warming. That is just one of the arguments that Cormac Ó Gráda, one of the world's leading authorities on the history and economics of famine, develops in this wide-ranging audiobook, which provides crucial new perspectives on key questions raised by famines around the globe between the 17th and 21st centuries.

The book begins with a taboo topic. Ó Gráda argues that cannibalism, while by no means a universal feature of famines and never responsible for more than a tiny proportion of famine deaths, has probably been more common during very severe famines than previously thought. The book goes on to offer new interpretations of two of the 20th century's most notorious and controversial famines, the Great Bengal Famine and the Chinese Great Leap Forward Famine. Ó Gráda questions the standard view of the Bengal Famine as a perfect example of market failure, arguing instead that the primary cause was the unwillingness of colonial rulers to divert food from their war effort.

The book also addresses the role played by traders and speculators during famines more generally, invoking evidence from famines in France, Ireland, Finland, Malawi, Niger, and Somalia since the 1600s and overturning Adam Smith's claim that government attempts to solve food shortages always cause famines.

Thought provoking and important, this is essential listening for historians, economists, demographers, and anyone else who is interested in the history and possible future of famine.