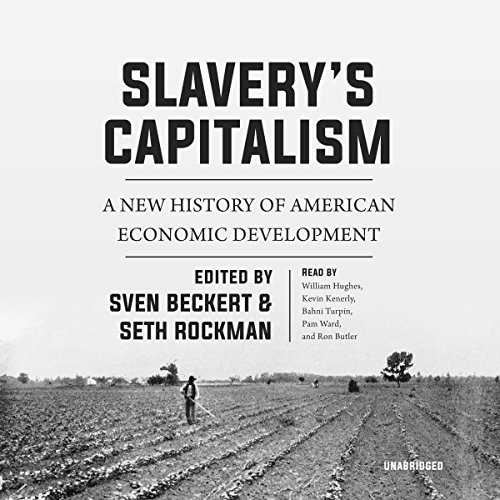 During the 19th century, the United States entered the ranks of the world's most advanced and dynamic economies. At the same time, the nation sustained an expansive and brutal system of human bondage. This was no mere coincidence. Slavery's Capitalism argues for slavery's centrality to the emergence of American capitalism in the decades between the Revolution and the Civil War. According to editors Sven Beckert and Seth Rockman, the issue is not whether slavery itself was or was not capitalist but rather the impossibility of understanding the nation's spectacular pattern of economic development without situating slavery front and center. American capitalism - renowned for its celebration of market competition, private property, and the self-made man - has its origins in an American slavery predicated on the abhorrent notion that human beings could be legally owned and compelled to work under force of violence.

Drawing on the expertise of 16 scholars who are at the forefront of rewriting the history of American economic development, Slavery's Capitalism identifies slavery as the primary force driving key innovations in entrepreneurship, finance, accounting, management, and political economy that are too often attributed to the so-called free market. Approaching the study of slavery as the originating catalyst for the Industrial Revolution and modern capitalism casts new light on American credit markets, practices of offshore investment, and understandings of human capital. Rather than seeing slavery as outside the institutional structures of capitalism, the essayists recover slavery's importance to the American economic past and prompt enduring questions about the relationship of market freedom to human freedom.

What listeners say about Slavery's Capitalism

This should be taught in every history and economics class in the US. Incredibly important for anyone, but especially white people, to read.

Brilliant, though inelegant in its organization

One of the most fascinating topics out there. This collection of essays makes a convincing and chilling argument for how capitalism, contrary to popular belief, was wholly compatible with the institution of slavery. in fact, it was more than compatible; it was complicit in the growth of American slavery throughout the antebellum period.

The book, though, doesn't stop there. it makes a further argument that our modern global capitalist economy was built on a foundation of slave labor: as the cotton that fueled the textile mills--crucial for the early days of global industrialization--were grown and picked by American slaves.

My only critique of this book is that, as a collection of individual essays, the book lacks strong connective tissue chapter to chapter. All the essays are connected by a singular theme, but that theme--the inter-relation of slavery and capitalism--is incredibly broad, and so each individual chapter can cover vastly different aspects of this theme. At times, the arrangement of the essays leads to a rather jarring shift of focus from chapter to chapter.

But, aside from this, the book is excellent and a mi
must-read.

The volume is so low I can't hear it.

I have listened to almost 100 audiobooks on Audible and this is by far the very worst. Buyer beware.

The truth about America's economic power

The school history classes will not explore the depths of America's capitalism and the detrimental effects of slavery. This book is throught provoking, makes the reader angry, and brings tears to moments of how cruel humanity can be for profit. There is so much research in this book that I will have to listen and read it about three times to get a better understanding of the rich content.

cheaper 32 the reader repeatedly calls the rothschild's the rothshields. Maybe that is some different pronunciation of Rothschild I have never heard before. luckily that particular reader isn't on very long. please get people that know something about the subject to read and listen to the book before you publish it.

If you're a facts and figures person maybe you'll enjoy it. I was hoping there would be some anecdotal stories to emphasize the figures and percentages in this book.

I couldn't finish it.

A Critical View of Slavery

I absolutely loved this book. The information within was so valuable and necessary. This book filled a lot of blank spots I had about how the business of slavery supported this country.

Truths Both Logical and Believable

This book was an excellent mass of logical, factual info to paint the picture of the socio-economic and the political points of American slavery. Rather one wants to believe or not, this is the account on how America carried out wretched business for a long time.