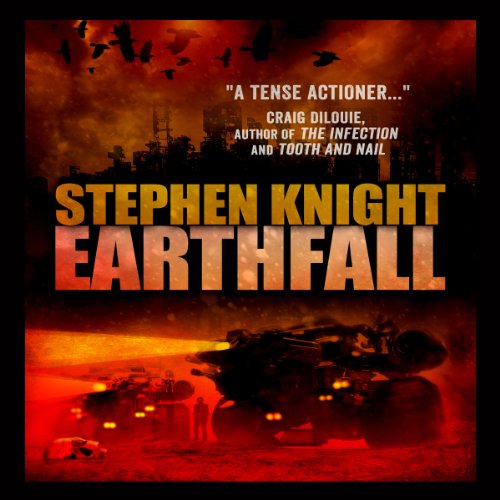 By: Stephen Knight
Narrated by: Guy Williams
Try for £0.00

WHEN OUR WORLD ENDED, THEIR MISSION BEGAN

The Sixty Minute War brought humanity to the brink of annihilation. Billions perished. The planet Earth was turned into a virtual graveyard, with the shattered, burned-out skeletons of great cities serving as tombstones marking Mankind’s demise. But in the United States, one final outpost remains. Ten years have passed, and Harmony Base, a subterranean U.S. Army installation that survived the nuclear inferno, has yet to receive any response to its continual radio transmissions. Long-range surface reconnaissance missions fail to locate any other survivors. Harmony's personnel, a mix of military and civilian specialists, wonder if they are the only living beings left on the planet.

Earthquake damage to the base's vital power plant necessitates a different type of mission: the retrieval of spare parts from a storage depot in San Jose, 1,600 miles distant. Captain Mike Andrews and his crew set out across a Giger-inspired landscape blighted by lightning storms and deadly hazards that could swallow their all-terrain vehicles whole. The last thing Andrews expects to encounter in the nuked ruins of San Jose are survivors led by a twisted freak with mental powers off the scale... Harmony is America's last chance to rise up from the ashes of the nuclear holocaust and help restore civilization. But only if Andrews and his crew can escape San Jose... and the madman who calls himself The Law.

What listeners say about Earthfall

Not what I was hoping for.

As an avid reader of post-apocalyptic fiction I may be a bit jaded, so take this witha grain of salt.
The story comes across as a mix of Damnation Alley (the movie, not the novella) and Fallout (the video game). A well-worn plot that has the pitfalls of either being an exciting ride or a grind to get through.
As far as characterization goes, it was a bit hard for me to find anyone likeable. They were either one-dimensional background filler or stereotypical cutouts.

Has Earthfall turned you off from other books in this genre?

Would you be willing to try another one of Guy Williams’s performances?

Maybe in something purely narrative. His vocal range has a small spectrum and differentiating between characters was a little hard in some places.
Plus, and I'm not trying to insult Mr. Williams here, his vocalization of the main protagonist was an almost dead-on (and completely unintentional) impersonation of Zap Brannigan (Futurama). Add cliched plot points and dialogue to the mix and, yeah, its a grind.

So...almost there -- for both author and reader

Reminded me a great deal of the old move from the 70's "Damnation Alley" (which I liked, in a cheezy kind of way)

The reader first -- He's VERY talented and he voiced the characters with great skill and with enough differences between them that you could really tell who was speaking. Unfortunately, I thought he chose to over play some of their personality traits and it made them into almost comical archetypes when they didn't need to be.

The story --- So much potential, and so interesting, that it's a shame what the author did to the plot about half way through. I don't want to give it away, but he took a book that was based on a lot of thought and research and then dove off the comic book deep end to make an antagonist when it really wasn't necessary at all.

Took 11 chapters to get any action. Dialogue is stilted, simplistic and sounds like it was written by an 8th grader. If I hear "dude" one more time I will go crazy. Announcement of many of the chapter numbers is screamed, it is so loud. A lot of meaningless description as though they were looking to add pages to the story.