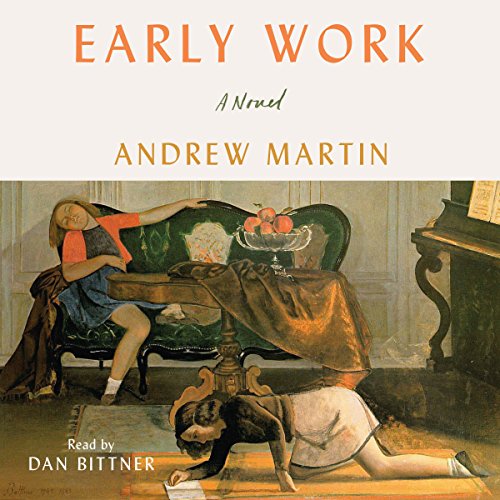 By: Andrew Martin
Narrated by: Dan Bittner
Try for £0.00

Andrew Martin’s serio-comic debut audiobook, Early Work, follows an aspirational author desperately seeking his muse in all the wrong places - only to find it in an adventurous woman with a unique perspective on life and love.

For young writers of a certain temperament - if they haven’t had such notions beaten out of them by MFA programs and the Internet - the delusion persists that great writing must be sought in what W. B. Yeats once called the “foul rag and bone shop of the heart.” That’s where Peter Cunningham has been looking for inspiration for his novel - that is, when he isn’t teaching at the local women’s prison, walking his dog, getting high, and wondering whether it’s time to tie the knot with his college girlfriend, a medical student whose night shifts have become a standing rebuke to his own lack of direction.

When Peter meets Leslie, a sexual adventurer taking a break from her fiancé, he gets a glimpse of what he wishes and imagines himself to be: a writer of talent and nerve. Her rag-and-bone shop may be as squalid as his own, but at least she knows her way around the shelves. Over the course of a Virginia summer, their charged, increasingly intimate friendship opens the door to difficult questions about love and literary ambition.

With keen irony and a wide romantic streak, Andrew Martin’s Early Work marks the debut of a writer as funny and attentive as any of his generation.

What listeners say about Early Work

I would not have finished this book if it were any longer. But I kept listening in, because the characters and the sex were all vaguely interesting. But, my God — the characters were so dull and substanceless. They were all too clever without ever saying anything interesting, which perhaps was the point, but the point was made in the first chapter. The point of view switch at the end also felt like a cop out. Maybe I am being too hard on this book, since I did listen to the end, after all. But... yeesh.

Waste of my time

The author writes well and apparently has read many books, but seems to be as lost as his characters...Boring and annoying...